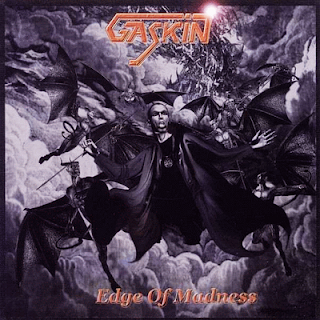 ##N.B.- The following review is not my own, but one with which I agree, therefore I am reproducing it here. The author is unknown to me, but all credit for this review should go to them.##
"GASKIN, even if credited as NWOBHM participants back in the early '80s, had a more bluesy Hard Rock orientated taste.
Sadly, the band rounding extraordinaire guitarist Paul Gaskin did not find the road to commercial breakout with its two full length LPs released in 1981 and 1982 respectively. A silently released, good comeback album in 2000 put a wide smile on the band's fan base.
Now in 2012, Gaskin is back again with the new CD “Edge Of Madness”, and their flirt with traditional, vintage British melodious Hard Rock will not let down fans of the genre.

First thing to be said about this new album is that the production / sound is totally old-school and with a big late '70s / early '80s eerie feel that shall make you memorize the times rock music was nothing more and less than a message from the heart. Secondly, in this album the band - and Paul in specific - show a great sense of touching melody.
Being the classic rocky UK breeze or some more melodic moments that will even bring old Whitesnake to mind, the quartet has put lots of effort into writing songs that can tug the listener’s heartstrings in ease.“Edge Of Madness” is totally Hard Rock as this specific term was firstly announced in the UK in the beginning of the genre, added with the bluesy guitar playing of Paul Gaskin himself, you will certainly feel entrapped in a series of numbers that celebrate the times when Hard Rock music had its dynamics lurking in the touching solos or warm deep vocals.
The hardest yet melodic numbers include "Damnation", the lovable "Heart Like Thunder" (how could you resist to a song with this title?), "Edge Of Madness" and, to some extent, "Bedlam".
Then the trio of songs "Man's World", "Wake Up Dead" and "Lost & Lonely" lean more towards Melodic Hard Rock, all featuring contagious melodies.
The guitar work is one of the great strengths of most every song here. Conversely, Gaskin's vocals can sometimes seem pretty standard. Yet, on a song like "The Contract", there's an unusual difference, a near effortless versatility.
I did not expect such a classy album from this veteran band in year 2012, I have to admit.
Fans of the melodic side of the early eighties Hard Rock movement or devotees of the guitar style of Michael Schenker, Gary Moore or the late Paul Samson will enjoy this CD with open arms.
Definitely classic sounding but with an up to date production and mastering techniques, “Edge Of Madness” proves that traditional guitar-driven Hard Rock is alive & kickin'. And in good health.

Posted by The Sinister Angels realm at 23:19