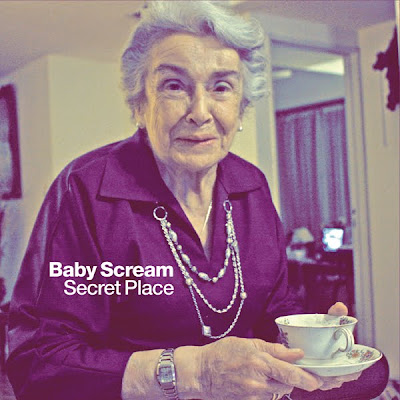 Baby Scream return with their Eighth studio release, hot on the tail of last year’s self titled album, with Secret Place.
"The story behind Secret Place, Baby Scream's eighth album and the first to be released by Eternal Sunday, begins when the government office Opción Música, that belongs to the City Government of Buenos Aires, announced that local indie labels could present proposals for recording an album at Estudio Urbano, a cultural centre dedicated to rock music and youth culture. The winners could use 80 hours of recording. Eternal Sunday proposed recording a new Baby Scream album (the band was releasing its homonymous album by OK! Records in the UK) and the project was accepted, so the band has to enter the studio to make a new album in two weeks."

The result is a refreshing laid back and honest album upon which composer Juan Pablo Mazzola takes us on a journey through a myriad of music styles and influences from the relaxed rocker, opening track The Last Call, through the Lennonesque Hit and Run (which is set to be released as the lead single from this album!) on through the darker themed songs like Going North. Cold Weather Reggae throws us a bit of a curve ball, but once again shows that Juan can turn his hand to writing almost any musical style that he chooses. The rest of the album continues in the same vein, relaxed laid back songs covering almost every emotion, even Eating My Face, which covers a dream where composer Juan was served his own head to eat in a restaurant!

The standard of the song writing and the musicianship on display here is as always top notch. THERE REALLY ISNT A BAD SONG ON THIS CD!
Secret Place maybe a little more laid back than some of Baby Screams previous release’s, but its still a truly stunning album, if you are a fan of Baby Screams previous releases then you will love this album, if you’ve not heard Baby Scream before, then why not? Check them out, they’re a great band producing great music!
The albums out August 15th, do yourself a favour and grab a copy!

Hit And Run (single)
Faithful to the classic rock tradition followed by Baby Scream, Eternal Sunday announces the release of the single "Hit And Run" backed with "20th Century Baby". "20th Century Baby" is a song written by the legendary Marc Bolan (the leader of T-Rex) that was only released as a demo after the composer's death. Baby Scream recorded its version during the Secret Place recording sessions.

The single will be available at every major digital store (iTunes, eMusic, Amazon, Spotify, etc.) on July 15th, 2011. (OUT NOW!)


Posted by The Sinister Angels realm at 23:14 No comments: Links to this post