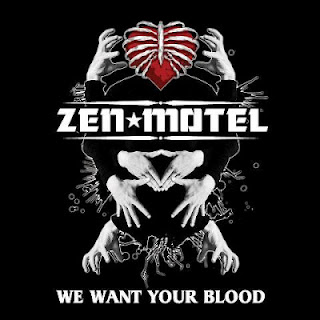 Formed back in 2003, Zen Motel release their third studio album in the form of We Want your Blood. Coming hot on the heals of the awesome Cranked Ep released earlier this year.
I bloody love this album, a worthy follow up to Cranked and the bands previous two albums!
Ten tracks, clocking in at just under half an hour, of angst driven hard rock with some great melodies.
Opening with the mighty Superhuman Colosseum, a weighty peice that delcares that they have given up giving in before crashing into the The Pit which first saw the light of day on the Cranked EP, still an awesome track, full of energy and angst. Kill Your Radio is up next, a slighty more commercial song that features CJ from the Wildhearts as a guest on guitars and vocals (the first of three tracks to do so!) as well as Si Fricker. This is a great song that debuted via the internet last year, but still sounds great in its finished form. Trust Your Leader follows, again a typical Zen Motel song, filled with twists and turns, another great addition to the back catalogue.
Death Rock City follows, again featuring CJ on vocals and guitars. Here the guys turn the tempo upa little, yet this song still has a very commercial feel to it, a great song that should be a huge hit, again a song that debuted a year or so ago via the internet. Cut and Run is up next, a little more atmospheric to my ears, yet retaining all the punk angst and rock elements. A great song.
Next up is the last of the three songs to feature CJ, Bone Deep In Trouble, a song that takes the album off on a little tangent with its acoustic guitars and almost country feel, this really is a great song!
Curse of The |Girlfiend follows, again a song that originally saw the light of day a year or so ago via the internet, darker and moodier than its predecessors, great fun and has a great video too!
The albums penultimate track comes in the form of I Will End This, a song that sees the tempo pick back up together with some some great lyrics and riffs. House Of The Dying Sun closes out the album, a slower more epic track but more importantly,another great song song rounding off a great album!
There is so much energy and diversity presented on this album that it truly showcases the bands abilities as both song writers and performers!
We Want Your Blood gives us six songs that we havent heard before ( and four that have been available for a while in some form), and is possibly a little too short forin my opinion, but still I absolutely bloody love it!

We Want Your Blood is another great album by a blood great British band that your really do need to check out. Lets just hope that we dont have to wait as long for album number four! Now where are those tour dates?

Posted by The Sinister Angels realm at 17:33 No comments: Links to this post 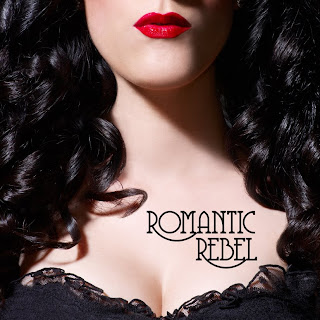 The trio is fronted by pinup model Cherri Bomb, whom apart from wearing sexy black fishnets and furious red lipstick, owns a killer voice to boot.

At first glance I was expecting some kind of modern rock in these four tracks, but Romantic Rebel surprises us with late '80s sounding female fronted styled Hard Rock.
Cherri Bomb's vocals spreads tons of personality and solid pipes over the meaty and sustained guitars delivered by Alex Vincent. This guy has a thunderous sound reminding me of Billy Duffy's work on The Cult's albums at the tail end of the eighties.
Romantic Rebel could recall more recent acts such a Halestorm as well, but their musical approach is much more classic metal / hard rock in style.
First track "Waste My Mind" is driven by a melting six-string riff and a contagious refrain, followed by "Dirty Love Song", which is the most modern oriented track in the EP and is the bands chosen single / video.
"On My Own" adds some acoustics and nice tempo changes but the song has a heavy electric riff too, including wah wah and a mix sounding quite vintage.
For the end, Romantic Rebel blows a stronghold take on Rainbow's "Long Live Rock 'n' Roll". I can't remember any other female fronted act covering this tune, but the band does justice to this classic tune with an incendiary version.

Romantic Rebel is a more than promising Female Fronted Hard Rock trio in a genre where doesn't abound bands playing this style with a sound firmly planted in the late '80s.
Cherri Bomb certainly can sing (and she's got the looks) while Alex Vincent fills the music with hot chops and a solid-rock sound. Production is really good - recorded & mixed by Steve Weeder (Michael Thompson's 'Future Past', Styx) - with a vintage feel in places, balanced with an updated vibe.
Late eighties / early nineties Female Fronted Hard Rock fans will embrace this EP with open arms.
Let's wait for a full length release to see if Romantic Rebel is able to jump into the major league. They have the potential."

Posted by The Sinister Angels realm at 16:21 No comments: Links to this post 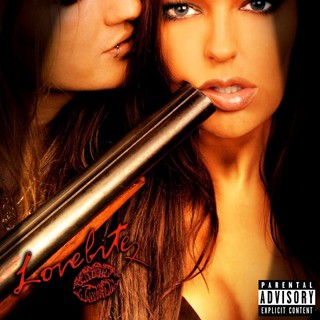 Where do I start?
Lovebite, (love the name by the way!), are a Birmingham (Midlands, UK) band that claim they are destined to be one of the hottest glam-metal bands to arrive on the UK scene, and to be fair I have to disagree. I feel that that particular statement sells the band short, as there is so much to these guys than being just a glam band. Sure, Lovebite's music is '80s Melodic Hard Rock influenced, not only in style / songwriting, but also in the way that they pull it off sonically. The guitars are loud and we have gang vocals all over, all wrapped with an intense and dynamic rhythm section, complete with cowbell and all.Yes there you can hear the influence of the genre legends such as Motley Crue, Skid Row or L.A Guns all over the place, but the songs are also more melodic and polished with infleneces such as Firehouse and Danger Danger clearly there to be heard.
A perfect example being Breakin' The Rules, a song that could quite easily be coming right off of Firehouse's debut in the way its composed and arranged.
With vocalist Johnny Sparks coming across as a blend of a young Vince Neil and Mike Tramp and the riffs coming loud and fast this album really does take me back, yet despite the clear 80's influence on the bands sound, the production brings that same said sound band upto date, leaving us with a great contempory sounding album.
For a band that have only been together for a relativly short time these guys show a helluva lot of promise.

Posted by The Sinister Angels realm at 15:57 No comments: Links to this post 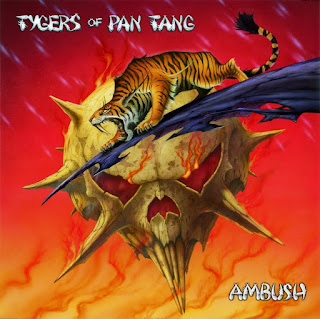 Its been a long time since these guys released their debut album "Wild Cat" back in 1980, a period of thirty two years that has seen them disband and reform twice and release countless classic NWoBHM master peices. Its a sad fact that Tygers of Pan Tang are criminaly overlooked by the majority of fans of the NWoBHM era, with the likes of Iron Maiden, Saxon, Diamond Head, Praying Mantis and Def Leppard taking the spot light, leaving some truly great songs undiscovered.

Ambush is the second full length release from Tygers... since they reformed for the second time back in 2001 and is a solid album to be fair. Founding member, Robb Weir (Guitars) is joined by Jacopo Meille (Vocals), Dean Robertson (Guitars), Gavin Gray (Bass) and Craig Ellis (Drums & Percussion) for this outting, and together witha strong clear production and some great songs they turn in a brilliant performance, with Ambush reinforcing the point that Tygers.... really do deserve your attention, and are still relevent and capable of putting out some great music after all these years.

The album seems to be the perfect ballance of Classic Melodic Rock and NWoBHM, with Jacopo's vocals dancing tantalisingly over the top of some great rock riffs. As I have already said the songs are strong, full of life and energy with great riffs and some awesome hooks taboot.
The first five songs have a more melodic leaning where as the rest are definetly more in NWoBHM vein, creating a solid and diverse album!

Stand out tracks for me have to include the opening track, Keeping Me Alive, Play To Win (which is a pure NWoBHM classic!), Burning Desire and Hey Suzie, a song that not only ressurects the character ftom the bands debut single but also has a feel very reminiscent of their debut album Wild Cat.

A Great album for a veteren band that is well worth checking out!

Posted by The Sinister Angels realm at 15:26 No comments: Links to this post