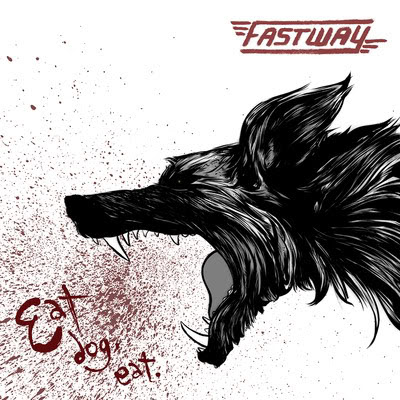 With a line up featuring the likes of Toby Jepson - Vocals (Little Angels, Fastway, Gun, Toby and the Whole Truth), Eddie "Fast" Clarke - Guitars (ex-Motörhead, Fastway), Steve Strange - Drums (Fastway), and John McManus - Bass (ex - Mama's Boys, Celtus, Fastway) it would be fair to say that we could expect something special from this album, and to be fair it delivers. What we get here is eleven very finely crafted songs combining the blistering guitar work of the legendary Eddie Clarke withe the amazing vocal talents of Toby Jepson, this makes for a great combination and some great hard rock moments.
Every song has something to offer but the real gem here for me is "Dead and Gone", a truly great track that really hhighlights the entire bands talents at their best.
This album is not just a nostalgic walk down memory lane, or yet another group of aging musicians desperatly trying to re-capture long gone memories, but rather it is a strong relevant release from a group of immensly talented musicians whostill have a hell of a lot to offer the music world of today!

A very strong album well worth checking out!

Posted by The Sinister Angels realm at 19:13 No comments:

Doogie White - As Yet Untitled 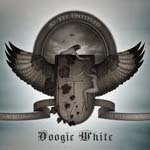 "As Yet Untitled is the first solo album of the Scottish singer Doogie White, who halfway of the nineties became world famous as the lead vocalist of Ritchie Blackmore’s Rainbow and who very convincingly took care of the vocals parts on the ‘Stranger In Us All’ record. After having sung for a couple of years at the side of mister Blackmore, he went on to do the vocals with another guitar hero being our Swedish ego-tripper Yngwie Malmsteen. With mister Malmsteen Doogie’s adventure lasted about six and a half years and two albums and recently he very surprisingly joined the reincarnated New Wave Of British Heavy Metal band Tank. Besides all of this over the years Doogie also recorded four (great) albums with his band/project Cornerstone, as well as albums with Tank and Empire"

So with such a wide ranging array of talent we should be expecting something special, and thats exactly what we get. With a sound that falls somewhere between the classic hard rock of bands like Rainbow and Deep Purple with a contemporary edge and production, As Yet Untitled is a damn fine debut!
Ten very strong melodic yet heavy rock tracks, that show case both Doogies amazing vocal range and his songwriting abilities too. (He co-wrote every track on the album!)

Every one of the ten songs here are excellent but stand out tracks for me have to include, opener Come Taste The Band, Dreams Lie Down And Die, Sea Of Emotion and Times Like These.
This album has been a long time coming, but it sure sounds like its been worth the wait. Lets hope we dont have to wait years for the follow up!

Posted by The Sinister Angels realm at 23:36 No comments: 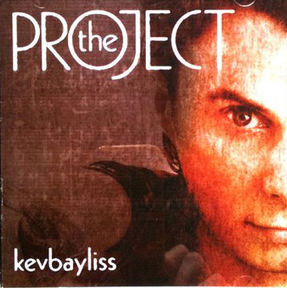 I first came across the vocal talents of Kev Bayliss in late 2009 via a cover-mounted cd with Classic Rock magazine entitled ones to watch in 2010. Upon said cd was a track by Kev's former group, Voodoo Johnson, titled Bad Habit, which immediately grabbed my attention. I quickly tracked down the two Eps that the band had put out and was blown away by tracks such as Seven years, Nowhere Inbetween and Broken. Quickly Voodoo Johnson became one of my favorite bands, with Kev joining the likes of Sean Harris (Diamond Head), Tony Martin (Black Sabbath, Empire, Cage, Giuntini Project), Glenn Hughes, and Ronnie James Dio as one of my favorite vocalists! Then after releasing a great debut album (10,000 Horses) Kev was to announce his decision to part company with Voodoo Johnson in late 2010 citing music differences as the reason. I was heartbroken, I had held high hopes for Voodoo Johnson and prayed that that was not to be the last that I would hear of Kevs amazing vocals.

Luckily, Kev quickly announced his plans to release a solo album, and now almost eleven months later, here it is in the form of The Project.
Joining Kev for this album are, Kev Bartlett (Drums), Nick Daniel (Bass / Guitars), Lucky Singh (Guitars), and former 30 Seconds To Mars Guitarist Kevin Drake. Together they have produced, in my honest opinion one of, if not the best album of 2011!
With The Project Kev has moved away from the angry heavy riff driven rock of his previous band, Voodoo Johnson, and adopted to folllow a more melodic, dare I say musically diverse direction all together.
Opening with Your Heart’s Desire, a finally crafted guitar driven pop song, with some great melodic hooks and some fine heart felt lyrics from Kev, as well as a great vocal line to boot. Next up is the lead single from the album in the form of Quicksand, a more poppy track with a distinctive indie feel to it, but once again a great song!
Falling Down follows, which in my honest opinion has to be a contender for the best song of 2011. A beautiful piece of modern guitar pop rock. A great song with an amazing vocal delivered from Kev!
Starchaser is up next, another great song, My Sorry Cinderella follows quickly, with its music box intro before exploding into great little rocking track, that I absolutely adore!
Next up is a track that fans of Kevs facebook sites should be familiar with as it’s been posted there for a while in rough acoustic demo form, One Day Older, which even in its unpolished form was amazing. Now finished and polished it just blows me away, a track that I can see myself listening to for years to come, truly outstanding, along with the equally brilliant Leave This Town which is up next. The excellent Kung Fu Master rocks things up a little again, allowing Kev to show just what a great rock vocal he can deliver. All I Own is up next, and is yet another contender for song of the year, the quality just never drops with this album!
Revolution closes out the album proper, another great song that has a great melody and some fantastic vocals along with its epic feel.

The pre order cds come with the bonus track, Make A Difference, which is another great little Gem. This album proves that Kev is not only one of the finest vocalists out there today, on a level with any of the biggest names in the business, but he is also a stunning songwriter as together with Kevin drake and Lucky Singh he has produced an album of twelve glorious tracks. A stunning and contemporary mix of pop and rock with indie sensibilities, and quite possibly my favorite album of 2011.

Although all twelve tracks are brilliant my favorites have to include, Falling Down, All I Own, One Day Older, Kung Fu Master, Revolution and Your Hearts Desire!

This album is very highly recommended!

Website - Kev Bayliss
Posted by The Sinister Angels realm at 22:18 No comments: 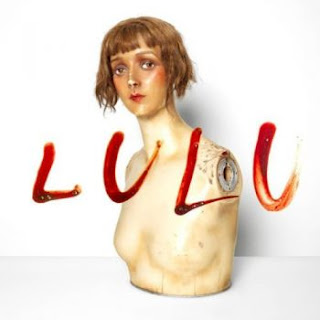 
Now please dont get me wrong, I love all kinds of music, I especially appreciate  when artists move out of their comfort zone and try something new and expiremental. I loved Freddie Mercurys Rock Pop Opera Cross-over album Barcelona, I love Insane Clown Posse and Twiztid with their Rap / Rock crossovers, I enjoyed Seb Bachs forays into counrty music but this, I just cant get my head around, or even see a point! I can honestly say with my hand on my heart that even the most hardcore fans of either artist are going to have trouble managing to sit all the way through this monstrousity in one sitting. Metallica have recently come out to assure fans that this is not the new Metallica record I can see why!
All that said, closing track  Junior Dad has some interesting moments, but at almost 20 minutes long you'd hope that it would.

Seriously this album is only for the completists of each artist.

Posted by The Sinister Angels realm at 23:19 No comments:

Meat Loaf - Hell In A Handbasket 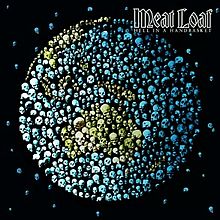 Meatloaf returns with his latest offering and the follow up to last years Hang Cool teddy Bear. Now I am a huge Meatloaf fan, I always have been but here we have the same old problem with Meat's new albu as we have with many of his non Bat Out Of Hell releases, that is the lack of one Mr Jim Steinmen. Once again it feels a little too much like Meatloaf by numbers, like he is just not being pushed and stretched enough in the studio. Dont get me wrong, Hell In A Handbasket is not a bad album, its full of more than competant songs, the musicianship is excellent and Meat is in fine voice, its just that it os a little too much by the numbers and therefore a little dissappointing.

The album has a few high points, Fall From Grace, The Giving Tree and closing track Blue Sky come to mind, but its not a touch on any of the three Bat Out Of Hell albums!

Posted by The Sinister Angels realm at 22:53 No comments:

Dave Mustaine returns with his latest incarnation of the mighty Megadeth, a lineup that includes,
Dave Mustaine (Guitars, Vocals), the returning David Ellefson (Bass), Shawn Drover (Drums) and Chris Broderick (Guitars), and by God these guys have rediscovered their form. Thirteen is the Megadeths thirteenth album and quite honestly probably their strongest since Youthanasia! Yes you read that right, dave and the crew have managed to tap into that rich vein that they plundered so well with the Countdown To Extinction and Youthanasia.

""TH1RT3EN" has several levels of meaning, which Dave Mustaine, who first picked up an axe at the age of 13, reveals, saying, "I was born on September 13th; this is my thirteenth record. It just seemed like it was the right thing to do to call it "TH1RT3EN". Mustaine is incredibly proud of the music put forth on the new recording, "This record is the culmination of my work over the 13 records I recorded. There are moments on "TH1RT3EN" that capture my every emotion, and other moments where I am releasing feelings I never knew existed! My proudest moments of my musical career are captured on "TH1RT3EN"."

In TH1RT3EN Megadeth have produced the strongest album to come from any member of the "Big Four" in years, and yes that included Anthrax's stunning comeback album Worship music!

Stand out tracks for have to include, Sudden Death, We The People, Guns Drugs & Money and the title track 13.

A stunning return to form from one of the best metal bands out there!


Posted by The Sinister Angels realm at 22:33 No comments: