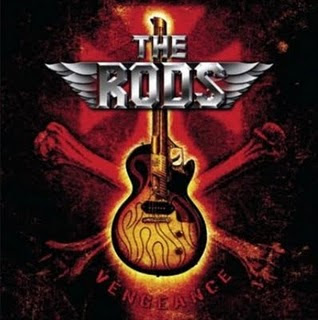 Legendary Cult rockers The Rods reunite for one last stab at the cherry, with the Immortal voice of Ronnie James Dio lending a helping hand. First off, let’s get one thing straight, Vengeance is a true retro album -- it is pure uncompromising, aggressive and melodic hard rock / heavy metal.
The Rods, although American, had a very NWoBHM sound about them, back in their day they cut some classic tracks, Crank It Up probably being the most famous. With Vengeance, they continue pretty much where they left off, 25 years ago. The songs are pretty solid, the production is crystal clear, and we’re in for a good time I think!
First I should be honest, I am only really aware of this albums existence because it includes one of the very last songs that Ronnie James Dio sang upon before he sadly passed away 12 months ago, The Code. So let’s deal with this track first, even though its track 5. The Code is a heavy song, with a powerful performance put in by Dio, unbelievable considering he passed away a few weeks later. It’s got some great lyrics, and a brilliant theme, yet it’s not the best song to feature Ronnie, and if I’m totally honest, as much as like the song, I doubt that it would have made the final cut of the Heaven & Hell album, The Devil You Know.
Now that tracks out of the way, what of the rest of the album? Well as I said earlier, it’s a straight up rock / metal album, very much in the vein of Saxon and Judas Priest in places. There’s a high energy attitude about the songs on this album, and if you like your rock in the classic NWoBHM vein, then Vengeance could be right up your alley!

Posted by The Sinister Angels realm at 21:02 No comments: Links to this post

Who Cares? - Out Of My Mind (2 Track Charity Single) 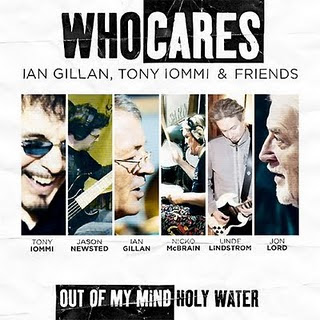 The all-star line-up has recorded two new songs. They are to benefit a music school in Gyumri, Armenia. The review below tells you all you need to know about these tracks, awesome!

"This two track charity single by Who Cares has been released to support the rebuilding of a music school in Gyumri, Armenia. Ian Gillan, Tony Iommi and various other hard rock and metal stars, have combined to record two original songs and it was that fact alone that tempted me to make a purchase.

The first track Out of my mind, is a classic sinister hard rock track, all heavy guitars and growling Hammond (courtesy of Jon Lord), with a couple of killer slow burning guitar solos. My favourite track however, is Holy Water which has the feel of classic Ian Gillan solo material. It rocks a bit harder than the recent One Eye to Morocco album, but with a haunting duduk intro opening the track and Ian Gillan's alternately mystical/anecdotal lyrics, the song is very much in that vein.

The music feels as gelled as any touring band, and deserves to make it into your record collection on its own merits. Rather toning down their excesses and hoping for a radio friendly effort, Who Cares have produced the sort of material their fans rightly love them for and donated the proceeds to charity." ( testedonpencils 2011)

I tend to disagree, in that Out Of My Mind is my favourite of the two songs, but both are future classics!

Posted by The Sinister Angels realm at 20:35 No comments: Links to this post 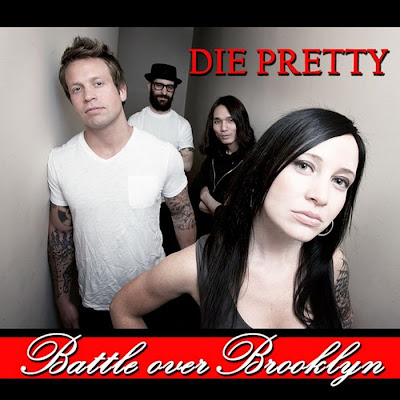 "Die Pretty formed in 2005. Brother and Sister Skip and Sarah stemmed Die Pretty from their previous band of 8 years. With their new aggressive style of combining punk and catchy rock they have graced the stage with such acts as Goldfinger, Everclear, Pennywise, The Living End and many more. They have been called, "The Punk Rock Hope" by Brooklyn Music Magazine. Their style has been described as sticks of dynamite with a punk rock wick."
Sarah’s vocals, to me anyway come across as a sort of mix between Stevie Nicks and No Doubt's Gwen Stefani. The band has grown musically since their 2009 release, Bittersweet, which was typical break neck punk rock album, with huge melodies. This Ep shows a more melodic side to the band, 7th Avenue becoming an instant sing along, even on its first spin. Let Me out! is more akin to the band’s debut, super fast punk riffs with a huge melody over the top. Voices closes out this 3 track Ep, with its 80's New Wave feel, and I must say I found this Ep thoroughly enjoyable!

I think we should expect big things from these punk and punkettes!

website - Die Pretty
Rating - 8/10
Posted by The Sinister Angels realm at 19:36 No comments: Links to this post

Black Stone Cherry - Between The Devil And The Deep Blue Sea 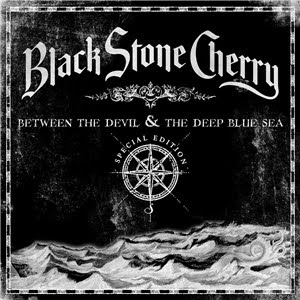 Black Stone Cherry return with their third studio album in Between The Devil And The Deep Blue Sea, once again filled to the brim with huge meaty riffs and hooks big enough to land moby dick himself!
There are some real gems and definite future Black Stone Cherry classics here, with current single, White Trash Millionaire, radio friendly Like I Roll, Moody Killing Floor, the fun Blame It On The Boom Boom and the true stand out track, Such A Shame, with its haunting soul chilling heartfelt lyric!
Between The Devil And The Deep Blue Sea is a great and solid album, with very few fillers to be found, with maybe the exception of Cant You See and Stay.

Black Stone Cherry's previous two albums were ballsy, and had their classic tracks, but I always felt that they were missing something, well looks like they’ve found it on Between The Devil And The Deep Blue Sea,

This album can be summed up on four words, Huge Riffs, Massive Hooks!

Website - Black Stone Cherry
Rating - 9/10
Posted by The Sinister Angels realm at 18:57 No comments: Links to this post 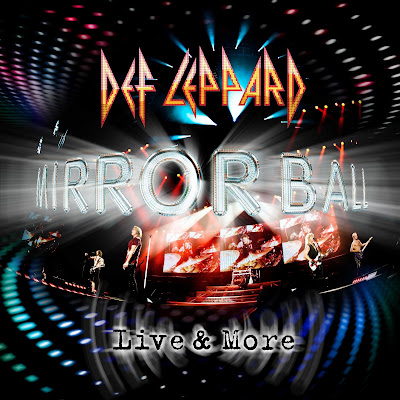 'Mirror ball' was recorded across the world over the course of many of the band's sold-out dates and features all of the classic songs that have made Def Leppard one of the most respected and beloved power rock bands in the world. Attempting to capture the group's legendary concert experience, this double disc set bring together many of the bands classic tracks such as 'Pour Some Sugar On Me', 'Rock Of Ages','Foolin'', 'Hysteria', 'Photograph' and 'Bringing On The Heartbreak', a great set list, I just wish that they were all from the same show!

The thing that is of real interest to me are the last three tracks on disc two, new studio recordings, current single Undefeated, Kings Of The World and It's All About Believin', each a future Leppard classic in their own right, but Undefeated is definitely one of the strongest songs that the guys have come up with in years, as is Kings Of The World with its very Queen - esque sound, awesome

A great introduction for new fans, and a pleasant addition to us older fans

Website - Def Leppard
Rating - 9/10
Posted by The Sinister Angels realm at 18:43 No comments: Links to this post 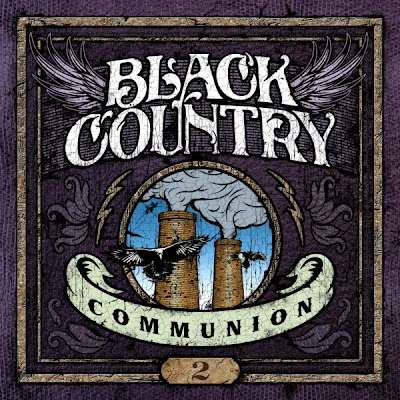 New rock super group, Black Country Communion, follow up last year’s awesome debut album with "2". Pretty much continuing where the debut left off, with their bluesy soulful, Deep Purple meets Led Zepplin sound. With the pedigree within this band you expect the songs to amazing, and they don’t let you down!
The album opens with two powerhouse tracks, The Outsider and Man In The Middle, before the band slow things down a little with The Battle For Hadrian’s Wall, an epic bluesy track that could of easily have been a part of guitarist's Joe Bonamassa's album Dust Bowl. Save Me follows, a song with a very heavy Zepplin feel to it, which isn’t surprising considering drummer Jason Bonham claims that it has its roots in a jam that took place between himself and Zepplin Messer’s Jimmy Page and John Paul after the famous 02 reformation gig! Awesome song! Everyone pulls through with this with some great work from Joe and Glenn!
And it just doesn’t stop, with song after song of supreme high quality classic bluesy rock!

I truly hope that these guys can keep the egos in check, because so far they’ve delivered two fantastic albums, if they can stay together they will become a legendary band in their own right!

Rating 10/10
Posted by The Sinister Angels realm at 18:20 No comments: Links to this post

Sixx A.M. - This Is Gonna Hurt

The album is filled with atmospheric, haunting and moody soundscapes, from the industrial tinged opener, and title track, This Is Gonna Hurt, to the big ballad Smile. This is an album that contains so many mixed musical styles, yet is woven together so well it’s unbelievable!
Another truly outstanding thing about this album is the simple fact that every one of the 11 tracks stands perfectly well on its own, there’s not a duff track in sight, something of as rarity today!
Once again the band, Nikki Sixx – bass, James Michael – vocals and DJ Ashba – Guitar
really do themselves proud, showcasing their talents and songwriting to perfection.
As I said, all 11 tracks are brilliant, but a couple really do stand out to me, those being title track, This Is Gonna Hurt, Lies Of The Beautiful People, Deadlihood, Oh My God and album closer, Skin.