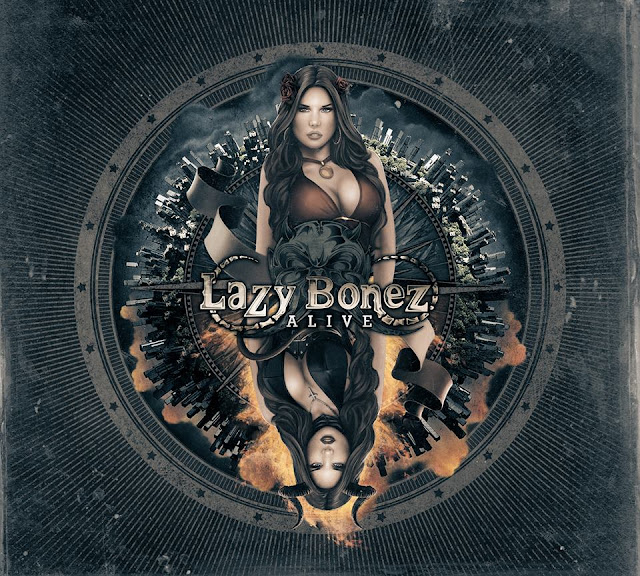 Finnish band, Lazy Bonez  return with their second album in the form of "Alive", a pretty darn solid effort it is too!
Now we have to get some cleared up very early on here, Lazy Bonez have two very distinct sides to them, one hook laden catchy eighties inspired melodic rock, suck as on tracks like the driving 'Evil Mind' which is akin to Pretty Maids, or the AOR-ish "Sweet Girl" with plenty of keyboards and harmony vocals and a catchy Brother Firetribe feel, or the meaty mid-tempo title track "Alive" with some early Nineties Europe on it. And then there is the heavier side to Lazy Bonez that provides an effective balance to the record, such as can be found on tracks like "Racing Heart", a song that was especially composed for the vocal talents of one Mr. Tony Martin who appears as guest on the track, a groovy and at the same time melodic track much in the style of Eightiess Black Sabbath. (The main reason for me looking into this album in the first place!)Then another legend shares vocals on the pretty epic mid-tempo "Devil's Dice",  Uriah Heep's Bernie Shaw,  while "Final Rhyme" sports an '80s Accept spirit to it. There is also the ridiculously catchy melodic rocker "Lonely" (I Love it!), the sweet "Hard Times" or the great "Last Rites". So as you can see, with 'Alive', Lazy Bonez really do seem to cover all of the hard rock bases.

But whilst such versatility is certainly to be commended, it does sometimes leave the listener sometimes second guessing the bands intended direction, and in my opinion stunts the albums continuity a little. With that being said, 'Alive' is still worth checking out, even if only to cherry pick certain tracks into your playlists, such as 'Lonely' and 'Racing Heart'!

Posted by The Sinister Angels realm at 22:51 No comments: Links to this post 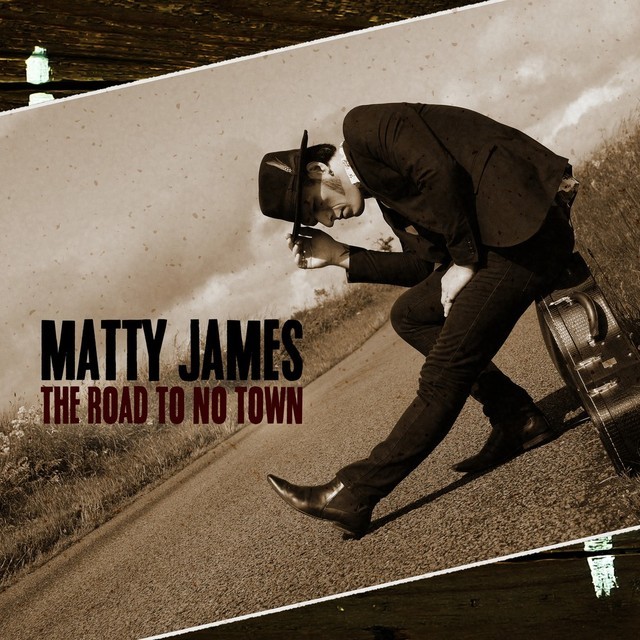 In similar style that of a certain Dog's D' Amour front man Tyla J Pallas, Matty James delivers his sophomore album in the form of the rather excellent 'The Road To No Town'. With  'The Road To No Town,’ Matty James is building upon an acclaimed debut and showcases just how he is developing as both a performer and more importantly as a songwriter. The album opens with a the foot stomping title track, 'The Road To No Town' before launching into the albums lead single, the defiant 'Stick's & Stones'. Next we have the 50's rock n roll inspired 'Heavy Heart', one of the albums many highlights in my honest opinion. 'Oh My Darlin'' follows which is another beautiful acoustic driven track with an old time rock n' roll, even rockabilly feel to it. 'Win or Lose' come next and is another highlight of the album, purely because of its pure uncomplicated simplicity. 'Gunpowder' increases the tempo a little with its more Celtic folk feel, a really great song. 'Money & The Devil' follows, this time bringing a slightly more sinister if not over dark feel to it, like an old time Chicago gangsta soundtrack, another great song. 'Hold On' is up next, with its acoustic driven ballad feel to it. A really good song. 'Dissatisfied' is a nice up tempo track that leads nicely into what is most definitely the albums crowning glory, its closing track, 'Cut With Dust', which is just a brilliant song, as simple as that.

'The Road To No Town' is a terrific album from an uber talented singer songwriter in the shape of Matty James, perfect for those times when you just want to wind down a little and listen to some soothing music that you know comes straight from the soul!

Posted by The Sinister Angels realm at 22:08 No comments: Links to this post 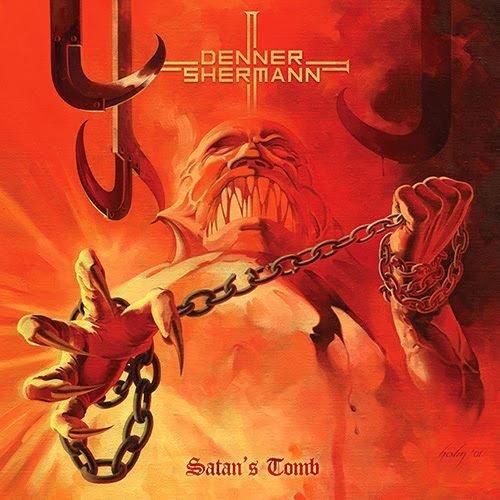 Mercyful Fate legends, Michael Denner and Hank Shermann join forces once again, several years after the two excellent Force Of Evil albums for this new project, together with drummer Snowy Shaw (Ex King Diamond), vocalist,  Sean Pecks (Cage) and bassist Marc Grabowski.
Seriously, Mercyful Fate fans are going to be going love the sound of this EP, with it only having one real down point, it too bloody short!
Guitar messiahs, Denner and Shermann deliver exactly what you would expect, trading effective riffs and solos, which will delight old Mercyful Fate fans, as well as any classic metal consumer.
When you consider the band members involved its hard not to try and imagine how a certain King Diamond may have sang these songs, and they would have all fitted well into the Mercyful Fate back catalogue, and then how does vocalist Sean Peck compare? Well to be fair, Sean does an amazing job here, really making the songs his own, delivering his own Halford / Owens influenced stamp on them. I'm not going to single any particular tracks out here, if you have any interest in classic metal or Mercyful Fate inspired music I can guarantee that you are going to love this EP. 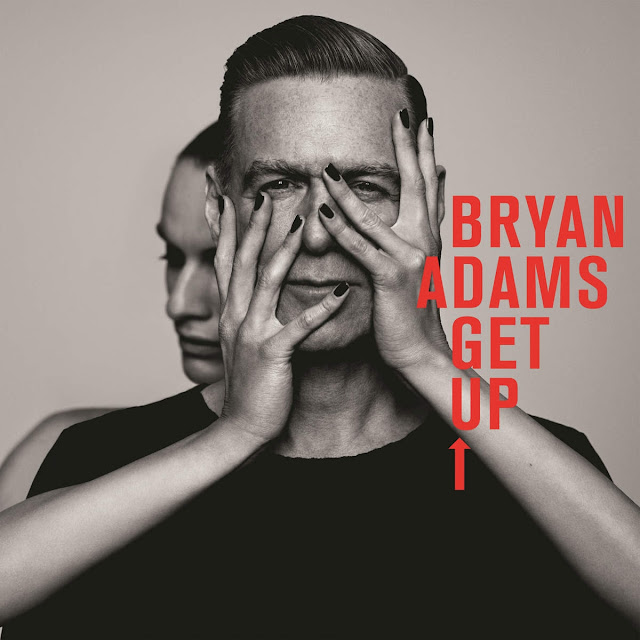 
The following review is taken off line, but instead of repeating or trying to paraphrase it, I have chosen to reproduce it here as I agree whole heartedly with its sentiments. All credit to the original reviewer!

"Multi-platinum Canadian BRYAN ADAMS long-awaited upcoming 13th studio album, produced by Jeff Lynne of Electric Light Orchestra fame, will be titled "Get Up". Due on October 16 in some countries (and at the end of the month in North America), the project was co-written with Adams’ long-time collaborator Jim Vallance, co-maker of his biggest hits.
Of all the skills in his repertoire, perhaps the most effective is Bryan Adams’ ability to keep things similar while never allowing them to become samey. There is a distinctly unique element to his sound – one that is quintessentially Adams-esque – but he is unafraid to alter his sonic signature in increasingly inventive ways.
He is also very clever to permeate the producer's style (always chosen by Adams) on every album. It happened in the past with Bob Clearmountain or Mutt Lange when shaped the sound in a Def Leppard vein.
It's no different now with Jeff Lynne; "Get Up" must be Bryan Adams 'most classic rock' album from his career.
The new songs in "Get Up" have all the hallmarks of the Adams sound: relatable, down-to-earth lyrics, Adams’ whiskey-and-honey tones and some energetic, infectious guitar work. But despite these recognisable elements, it’s not Adams covering Adams, or trying to cash in on the hits of the past.
"Get Up" is a solid collection of well crafted Rock songs, from the uptempo tracks such as lead song "Brand New Day", "That's Rock And Roll", "You Belong To Me" and "Thunderbolt," to the gentler tracks such as "Don't Even Try" and "We Did It All," plus the 4 Adams-produced acoustic versions, highlighting his unique voice and depth.
There is something immediately forward-thinking about the release: it sees Adams combining rock and roll in its purest form with the updated pop conventions of the present, creating a hybrid of past, present and future that immediately gratifies, and even thrills. Fortunately, there's no electronics here or modern touches, everything in "Get Up" is about Rock.
Adams may well be one of the most underappreciated rock&pop stars we have at the moment. He is a consummate professional, a fearless risk-taker, and a distinctive voice in a sea of imitators.
He is resolutely his own artist, and as a timely reminder of his many skills "Get Up" is a triumph."

Well Worth Checking Out!

Posted by The Sinister Angels realm at 15:31 No comments: Links to this post 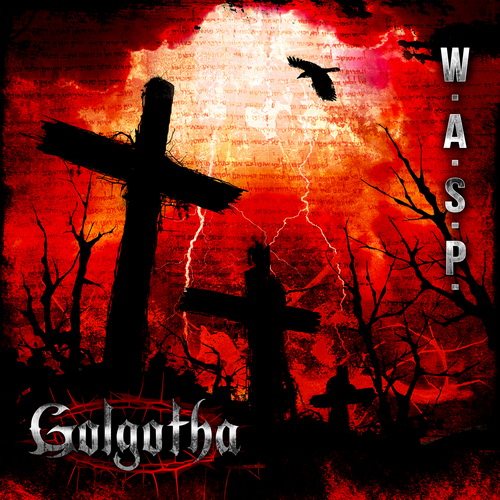 L.A. shock rockers return with their brand spanking new album, Golgotha, their first release in six years. Golgotha's name is taken from the name of the hill upon Jesus Christ was crucified ('Golgotha' is the Hebrew for 'the place of the skull'), and is probably one of the strongest indications to date of band leader's Blackie Lawless' 'born again' change of heart since finding the light!
But lets not hold that against him hey!
The album opens with a great melodic rocker in the form of 'Scream', a tight W.A.S.P. archetype with a blaring hook, humming bass line and terrific vocals from Blackie, who sounds like he's stored something in reserve during his extensive break. The backing vocals and dropped-in organs gives "Scream" added bulk and Doug Blair screeches and skids his guitar solo with gusto, before steaming into the semi autobiographical 'Last Runaway'. A great opening one two by anyone's standards. Next up we have 'Shotgun', a great song that in my opinion would have sat comfortably on either 'The Last Command' or 'Inside The Electric Circus' albums. 'Miss You' follows, this being the albums big ballad so to speak, and what a wonderful song it is too! Blair's guitar solo here is absolutely phenomenal!. One of the best ballads that Blackie has penned in years!
'Fallen Under' has the unenviable task of following that up, but does so magnificently. This song revealing W.A.S.P.'s darker edge, especially during is grinding verses. A great song.
'Slaves Of The New World Order' follows, clocking in at an epic 7 minutes 45 seconds, and coming across as a more polished 'Headless Children' era track. 'Eyes Of My Maker' is quite possibly another instant W.A.S.P. classic, with some great heartfelt lyrics and some great riffs throughout!
With 'Hero Of The World' once again sees Blackie engineering another WHO-fuelled crank-anthem, just as he has done some many times in the past. The albums title track has the honour of closing the album and what a track it is too! 'Golgotha' is the third epic of the album, with some great though provoking lyrics and all the great W.A.S.P. trade marks. A great song and to be fair the only logical choice to close the album.
'Golgotha' is without a doubt the best W.A.S.P. in years, and in my opinion the perfect blend of the raw energy and aggression the Headless Children and the sophisticated textures and layers of The Crimson Idol. Yes Golgotha is a typical W.A.S.P. album, only delivered with a renewed conviction and belief that I fear has been missing since the early nineties!


Posted by The Sinister Angels realm at 15:17 No comments: Links to this post