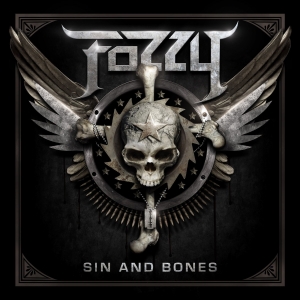 Fozzy, the hard rock / metal band featuring WWE wrestling superstar Chris Jericho (vocals) and Stuck Mojo's Richard Ward (guitar) return with their fifth studio album and the follow up to 2010's awesome and hugely successful Chasing The Grail. So how does this new album compare?Very well to be honest, Fozzy manage to match if not surpass the quality of Chasing..... without repeating any formula's.
Opening track, Spider In My Mouth has an intro that would fit any Alice Cooper album well, dark and atmospheric, and is somewhat a bit of a misfit on the album, a curve ball, opening the album with a track that no one would have expected!
Next up is Sandpaper, the albums lead single that features M Shadows on vocals with a notably more radio friendly sound, before Blood happens kicks in with its contrasting grinding riffs. The emotional Inside My Head follows before giving way to the riff laden title track, Sin and Bones that has one of those sing along chorus's that the live crowds are going to love.
The Unhurried A Passed Life follows which will either be loved or hated! People who buy the album for the driving Fozzy Rock, have to wait it out a bit - what we have here is a venture into  (slightly over) radio length progressive rock with a haunting metal undertone. Next up is the blues rocker She's My Addiction, which features one Phil Campbell of Motorhead on lead guitar. This track is surely one of the highlights of the album, if not Fozzy's entire recorded output!
Shine Forever is up next, and is probably the closest sounding track to the tracks on the previous album, a powerhouse stomper.
Then we get Dark Passenger, which in my honest opinion is the albums real standout track, its awesome, that's all I can say, I absolutely love this song, a contender for song of the year!
Then we get the albums closing track, the epic Storm The Beeches, a song told from a soldiers point of view that clocks in at just under 12 minutes long. Here Richard Ward has his Iron Maiden moment, and he does it bloody well!
There are two bonus tracks available on some formats, the brutal and grinding Walk Amongst The Dead and the Black Sabbath Cover Fairies Wear Boots which the band perform faithful to the original.

Sin and Bones is a fantastic album and one that I would highly recommend!!

Posted by The Sinister Angels realm at 22:54