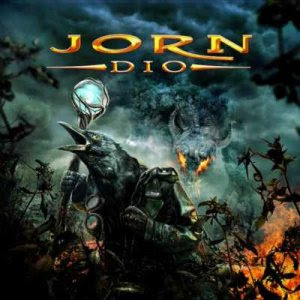 With the sad passing of a legend like Ronnie James Dio I guess it is inevitable the we'll get a flood of tribute albums, starting with this one by Jorn Lande, and to be honest, this is going to take some beating.

Opening with the only original track on the album, 'Song For Ronnie James', Jorn manages to set the perfect tone, with the aforementioned song being finely crafted very much in the Dio vein, and it fits well amongst the other 12 Dio classics.
The really smart thing here is that Jorn has not gone for the obvious song choices, instead choosing some of the more obscure album tracks.
'Invisible' follows 'Song For Ronnie James', with Jorn staying faithful to the original in both the arrangement and feel of the song. Jorn Lande's voice lends itself well to the songs too, with his Dio mixed with Coverdale vibe. An absolutely brilliant version of 'Shame On The Night' follows, and I have to say, I may even prefer this to the original!
'Push', originally from Killing The Dragon is up next, followed by a rawking version of 'Stand Up And Shout' A great version of the Dio classic 'Dint Talk To Strangers' is up next, again with Jorn putting in a stunning performance. 'Lord Of The Last Day', 'Night People' and 'Sacred Heart' follows before we get to possibly the albums highlight, 'Sunset Superman'. Here n and the guys really do find the heart and soul of the song, absolutely stunning!
A short Black Sabbath medley is up next, with Jorn managing to combine 'Lonely Is The Word', with 'Letters From earth' and the ending of 'Sign Of The Southern Cross', and by god, it works really well.
Next up is a breath taking version of Rainbows 'Kill The King', before the album closes out a live version of 'Straight Through The Heart'.

If ever Tony Iommi and Geezer Butler are considering a tribute concert of some kind for the late Ronnie James Dio then they simply have to ensure Jorn is involved in some way!
This is the very first tribute album for Dio, and will probably remain the best for some years to come!

website - http://www.myspace.com/realjorn
rating 10/10
Posted by The Sinister Angels realm at 20:35