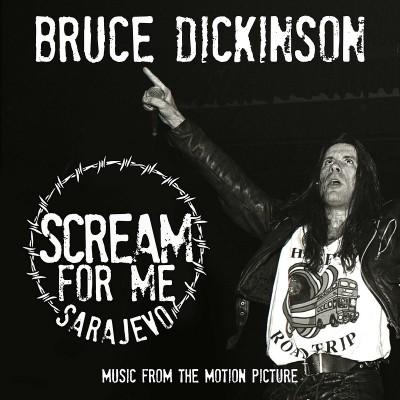 
Now this one is a strange release for me, not that there is anything at all wrong with it, it is after all a great compilation of the legendary Iron Maiden vocalists (Bruce Dickinson) solo out put. Its just the tracks included make very little sense to me to be honest, and yes I do realise that this release is the official sound track to the critically acclaimed documentary of the same name, that tells the story of Bruce Dickinson's (and his then young band Skunkworks), fabled concert in Sarajevo during the height of the Bosnian War. And that is where my confusion stems from.
Firstly, a little history lesson. The event took place in 1994, with Sarajevo under intense bombardment, Bruce and the band risked their very lives and ignored official safety advice to travel to the city and perform the now legendary concert at the Bosnian Culture Centre (BKC). The entire purpose of the trip, in which Bruce and the guys were literally smuggled in to the besieged area, being to tell the citizens of Sarajevo that they were not being forgotten by the rest of the world, despite their isolation.
Now 'Scream For Me Sarajevo' is not just a concert movie, it also reflects on the people of Sarajevo that were taking drastic measures to endure the brutal hardships of war and their struggle to survive. The critically acclaimed film includes footage of the concert, and the war, recent interviews with Bruce and his band mates, and also follows Bruce as he makes an emotional return to Sarajevo.
This release is the official soundtrack to the film, as previously stated, and includes music that spans the entire length of Bruce's solo career, including a couple of rare tracks, and this is where my confusion stems from. The concert took place in 1994, at the time Bruce had released two solo albums, 1990's Tattooed Millionaire and 1994's Ball To Picasso. He had put together a young band of musicians and was writing and recording songs for the album Skunkworks, which was also the banner under which he and his new band were touring, and would release the said album. So surely only material up until this point should be featured in this movie and on its soundtrack? Yet we have the majority of the material coming from 1997's Accident At Birth and 2005's Tyranny Of Souls albums. Strange, but putting that aside hoe does this soundtrack stand up as an album? Well to be honest very well.
The album opens with 'Change Of Heart', the epic 'Tears Of The Dragon' and 'Gods Of War', all originally from 1994's excellent Balls To Picasso album, that show cases Bruce's versatility and also how much his musical direction had changed since the straight up rock n roll of his debut solo album, 1990's Tattooed Millionaire. Next Up we have the excellent and broodingly heavy 'Darkside Of Aquarius' from 1997's Accident at Birth album which flows into the beautiful almost balladesque track 'Navigate The Seas Of The Sun', which is taken from 2005's Tyranny Of Souls album.
Next up we return the Accident At Birth album for the next three tracks, the rocking 'Road To Hell', co-written with a certain Adrian Smith (Iron Maiden/A.S.A.P./ Psycho Motel). The epic 'Arc Of Space' and the haunting 'Omega'.
The album then returns to Tyranny Of Souls as a source for the next three songs. The brooding atmospheric, 'River Of No Return', the rocking 'Power Of The Sun' and the heavy brooding 'Strange Death In Paradise'.
Next up we have one of this releases rarer tracks in the form of a track from the Skunkworks album, 'Inertia'. This is a live version of the track that was only previously available as a bonus track on the expanded 2005 re-release of Skunkworks.
This CD's penultimate track is the beautiful 'Acoustic Song', a wonderful acoustic ballad that was previously only available as a bonus track on the 2001 Best Of album (Special Edition). The album closes with 'Eternal', a beautiful almost Pink Floyd type of a song that was previously only available as a bonus track on the Japanese edition of the Tyranny Of Souls album.
So do I understand the track listing in relation to the monumental event that this album and documentary celebrate? No not really, but as a compilation of some of Bruce's finest musical moments, then sure. Scream For Me Sarajevo is a great album / soundtrack that showcases one of Britain's greatest and legendary vocalists at his best in the solo arena.

Posted by The Sinister Angels realm at 20:47