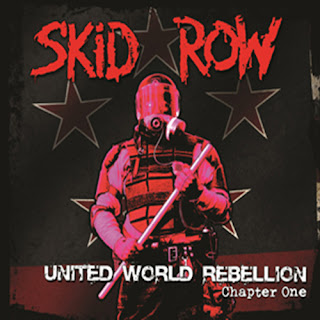 Skid Row return with a new five track E.p. United World Rebellion (Chapter One), which In my honest opinion just happens to contain some of the strongest material that the band have recorded since they split with Seb Bach way back in.......
To be honest, this EP contains some of the strongest songs that the band have put out since the phenomenal Slave To the Grind.
United World Rebellion opens with the thunderous Kings Of Demolition, a song that would have fitted nicely on Slave.... and a song that is quite easy to imagine Seb singing. Lets Go follows, with a more punkish attitude and delivery. Again another great song which is delivered with just the right amount of venom. Next Up is This Is Killing Me, a track that brings the bands debut album to mind with songs like 18 & Life and I Remember You. For some reason the song also brings Bon Jovi to mind, a good well constructed ballad that mixes up the Ep's tempo nicely. Get Up follows with its multitude of temp changes and epic feel, a great metal track!
Stitches closes out the Ep in style bouncing a long with the perfect mix of punk and metal, again a song that could have fitted well in the Slave To The Grind era bringing to mind songs such as Monkey Business etc.

A great return to form for a band that have become also rans for way to long, now if the the new album is up to the same high standards as this Ep we are truly in for a treat.


Well worth checking out!

Posted by The Sinister Angels realm at 21:20