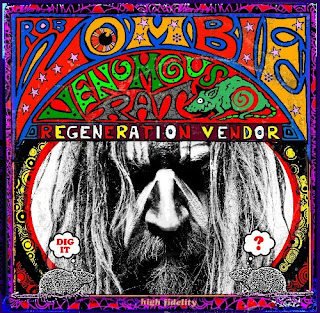 
Rob Zombie pauses momentarily from making Hollywood Horror movies to release a new solo album in the form of Venomous Rat Regeneration Vendor. Now if you have ever heard any of Rob Zombies previous material then you should pretty much know just what to expect, and if you havent, then where the hell have you been for the last twenty years?
Venomous Rat Regeneration Vendor is a solid album, filled to the brim with good solid songs all in the familar Rob Zombie style that we have become accustomed too, its a strong album with plenty of highlights such as opening track, Teenage Nosferatu Pussy, Dead City Radio...... Rock And Roll and Trade In Your Guns, but, and to me its a big but, this album, although a strong and solid album, see's Rob Zombie under achieving. There is nothing here that really pushes the boundries that Rob has already set with previous releases. Yes this album is a great album, I just for some reason feel that it could have been even more.
That said though, fans of Rob Zombie will find plenty on Venomous Rat Regeneration Vendor to keep them entertained, and its strong enough to be a good introduction for the curious listener.

Posted by The Sinister Angels realm at 22:14