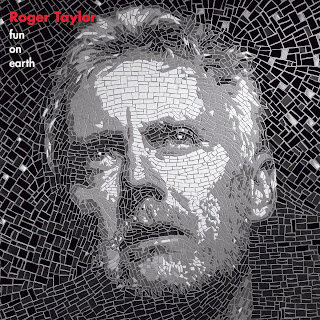 Legendary Queen drummer, Roger Taylor returns with his first solo album since 1998's Electric Fire in the form of Fun On Earth, deliver up 13 brand new tracks for fans to get the stuck into. But this is my only problem with Despite Roger taking five years to record Fun On Earth, five of the thirteen new tracks have already seen the light of day in one form or another, even if in some cases, quite obscurely. One Night Stand was a download bonus 'mix track from 1998's Electric Fire sessions, Sunny Day was released a couple of years back with Roger's son un the moniker of Felix And Arty with the title, Woman You're So Beautiful (although this song has been heavily reworked here!, Versions of Small and Say Its Not True were releasedon the Queen plus Paul Rogers album, The Cosmos Rocks, and a longer verion of The Unblinking Eye was released last year as a single! that being said, this album is a solid album and a grower at that! The album opens with a riff busting One Night Stand, quite catchy and up tempo. Fight Club and Be With You are excellent tracks, with their sheer simplicity being the greatest part of their magic, plus Fight Club has some great sax ta boot! Quality Street is a good track with some nice lead vocals and I Dont Care is a fun little ditty. The reworked Sunny Day is much better than the original Felix and Arty Version, and Be My Gal is another sweet and great track. I am a Drummer in a Rock n Roll band demonstrates that Roger and Queen never really take themselves too seriously, that ability to write a song that gets the critics hook line & sinker, has always been there and this is another... a bit of light hearted self deprecation as opposed to some serious statement. The Unblinking Eye suffers from being an Abridged version, and I truly urge you to check out the original single version! The final two tracks, Up & Smile are also some of the better work, the former reminding me somewhat of Machines from Queen's The Works whilst Smile has a very Beatle-esque sound to it.
In Roger Taylors own words, Fun On Earth is an ecletic mix of songs, and as such is a good album a real grower, but considering he alledgedly was originally going to allow fans to choose the albums track listing from between seventeen and twenty tracks thats had been recorded, it is a little disappoining having five reworked songs. Would have loved to have heard Midnight Lightning and When We Were Younf, but what the hey. Fun On Earth is still a great little album.

Posted by The Sinister Angels realm at 23:36