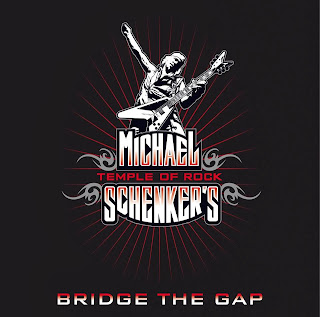 
Legendary German guitarist MICHAEL SCHENKER is back with a new album, "Bridge The Gap", that will do just what it says - it's the record that will find Schenker returning to the major leagues in the very near future. It's filled with great riffs, compelling melodies, the best set of songs on a Schenker project in ages, and it finally sounds like Mr. Schenker is back in a band: his Temple Of Rock.

The last five years have seen Michael steadily climbing and gaining confidence along the way - once hindered by the anxieties of stage fright, and all-to-many incidents of infamy, it would appear that the guitar master has settled into a place in which he finds peace, and full command of his considerable creativity. I don't know of a hard rock guitarist who doesn't hold the man in high esteem, and now they'll be back to chasing his lead.
"Bridge The Gap" continues Schenker’s fine run of form. It is a coherent and consistent album delivering 13 full-on tracks of hard, fast, melodic heavy rock, plus a trademark opening instrumental effortlessly delivered by a highly competent band which, in addition to songwriting partner and vocalist Doogie White, consists of Wayne Findlay (keyboards and 7-string guitar), and the former Scorpions rhythm section of Herman Rarebell (drums) and Francis Buchholz (bass).
Scotsman White is likeable and enthusiastic, and that energy has transferred well to the album. Rarebell and Buchholz are rock steady and admirably efficient. And Findlay, as always, provides understated and selfless support.
While there are particular tracks on the record that shine, and everyone will have their favourites, it’s Schenker’s all-round performance that lifts the album comfortably above the also-rans. Indeed, he sounds truly unfettered as he solos majestically throughout, and it’s a joy to hear.

“I had the same drive making this album as I had when I was 16,” says Schenker. “It felt like bridging the gap from my teenage and Lovedrive years to what I am doing now.”
Given this desire to blend the old and the new, Doogie White has proved to be an astute choice of singer. He often performs under the influence of the great Ronnie James Dio, and both his vocal style and experience make it easy for the band to reference and celebrate the rock tradition of which Schenker is part, but from which he has sometimes seemed disconnected.
"To Live For The King", for example, invites comparisons with White’s former band Rainbow, while there’s a touch of Heaven and Hell-era Sabs about "Shine On" and "Bridges We Have Burned". On a similar theme, there’s just a hint of Kashmir in the riff and keyboard lines on "Temple of the Holy", a track that also features Schenker at his absolute best with some trademark guitar work through the chorus and a great solo to fade.
The celebratory vibe is even more apparent on "Rock 'n' Roll Symphony" with White tying a number of classic rock song titles together in an entertaining lyric.
There are other stand outs; "Where the Wild Winds Blow" builds ominously before breaking into a catchy and melodic chorus which complements Schenker’s playing perfectly. It also features an unexpected classical guitar interlude mid-track against a warm choral backdrop.

"Lord of the Lost and Lonely", with its vaguely Celtic vibe, is also a melodic winner and strikes me as a not-too-distant cousin of Victim Of Illusion from the very first MSG album. "Because You Lied" is perhaps the most unusual track on the album featuring a jabbing riff from Schenker, some insistent tub thumping from Rarebell, and a different kind of vocal from Doogie.
But the pick of the bunch is possibly the slightly quirky "Dance for the Pipe", the kind of track – blending complementary vocal and guitar melodies – that is part of Schenker’s distinctive contribution to hard rock.
"Bridge The Gap" brings Michael Schenker at the top of his game riding higher in the saddle than he has in decades, rifling off riffs that make you ask 'How does he do that?' soloing with smoldering intensity and his trademark melodicism, and writing tunes you want to hear again and again.
Whist the mad axeman's guitar playing is why we attend, this record finds him partnered with veteran shouter Doogie White: the singing Scotsman has written the best melodies and lyrics to be heard on a Schenker project in a great many years, and there is something magical that happens when Michael is matched up with his Scorpions brothers, Herman Rarebell and Francis Buccholz.
Everyone on "Bridge The Gap" is playing at their apex, and they're reaching deeper and mining pure gold.


Posted by The Sinister Angels realm at 22:48