Spinal Tap - Back From The Dead Review 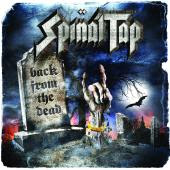 This year marks the 25th anniversary of the cult classic film "This is Spinal Tap", and now England's "loudest heavy metal band," SPINAL TAP, is celebrating with the release of its first new album in almost two decades, "Back From The Dead", which is also the first new album in almost two decades from England's "loudest heavy metal band" following 1992's Break Like The Wind, but does the world still want or need Spinal Tap?Well to be honest, yes, Spinal Tap have always shown that Rock fans and bands alike are not ashamed of laughing at themselves, and if you ask any artist from any genre of music I can guarantee that they've had a Spinal Tap moment or two in their carears!With Back From The Dead the comedy Gods of heavy metal return with a mix of old classics (many reworked like the (funky) SEX FARM and new material like Celtic Blues, Warmer Than Hell, Short And Sweet,Rock ‘n’ Roll Nightmare and Back From The Dead.Do the reworkings actually work?Erm.....I guess yes, Sex farm has a funky jazzed out feel to the music and even a little rap in the middle, which is interesting, and they've given Flower People a Reggae Stylee make over. In many cases I do prefer the original versions of the classic tracks that apperaed in the movie to these reworking although they do benifit from the better and more modern production. ARe the new tracks any good, well theyre typical Tap, so if you like Tap then you're gonna love em.If you remember the movie, grab this cd, if you dont well check it out!Highly reconmended, Long Live Tap!