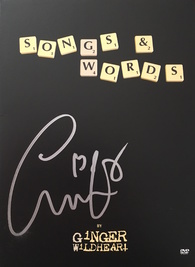 So what after seem like an eternal wait Ginger Wildhearts Songs & Words book has finally arrived. Now first lets just clear something up, the above statement is in no way meant to sound derogatory to anyone involved in this mammoth task, in fact Ginger has himself stated that when he began this project that he had absolutely no idea as to the timescale involved in both writing, editing, re-editing and then getting a book of the scale published, but by god it was worth it!

This book is first and foremost a beautiful sight to behold, jam packed with wonderful phots etc and informative stories.
Like the DVD of the same name, Ginger here tells the story of his career, only instead of making it a typical biography, he chooses to tell his story through his songs, giving us the stories behind them and what was going on in his world at the time that they were being written and recorded.
The book is as huge as the project to create it was, and well worth IT
I cant really say too much about this book without giving away spoilers, but it really is worth checking out!


Posted by The Sinister Angels realm at 11:42