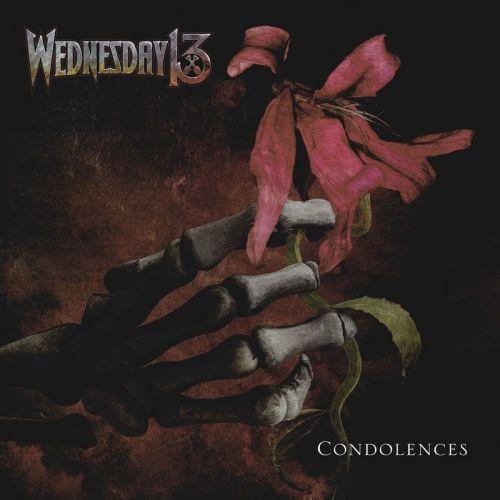 Ok, for those unfamiliar with Wednesday 13 here's the bio:

"A grimly glamorous ghoul who first slithered from the cobwebbed shadows of Charlotte, North Carolina, in the early 90s, Wednesday 13 has firmly established himself as the world's premier purveyor of balls-out horror punk insanity. With a vivid and vile imagination that has endeared him to countless fans of riff-driven macabre over the last two decades, he has been one of rock's most prolific protagonists, spreading his credo of grave-robbing rock 'n' roll and Hallowe'en debauchery around the globe and unleashing a seemingly endless stream of blood-spattered albums and EPs. "All my favourite stuff, like Kiss and Alice Cooper and Twisted Sister, those guys set the bar pretty high," he states. "I always wanted to do something in the worlds of those bands. That's the blueprint." After several years of sharpening his creative teeth, Wednesday 13 emerged from the fetid crypt of obscurity with his band Frankenstein Drag Queens From Planet 13, before becoming a bona fide international rock star as frontman for the Murderdolls, his collaboration with Slipknot's Joey Jordison. The band took the world by storm, with Europe and the UK in particular succumbing to the feral charms of 2002 debut album, 'Beyond The Valley Of The Murderdolls'; a raucous eruption of big tunes and bad attitude that noisily redefined the horror punk genre. After Murderdolls went on an extended hiatus in 2004, Wednesday 13 embarked on a widely lauded solo career that again provided him with an outlet for his relentless outpouring of fiendish musical and lyrical ideas. Murderdolls reconvened in 2010 for the vicious 'Women And Children Last' album and another successful world tour before disappearing once more into the freezing midnight fog, leaving Wednesday to revive his solo career with a few thousand volts of wicked electricity and an acclaimed studio album, 'Calling All Corpses'. Frustrated with the arduous process of releasing his own music, our favourite black-hearted freak has thrown himself and his music into a whirling maelstrom of reinvention. The result is not just the heaviest and most authentically disturbing record of the great man's career but also a huge creative leap forward, neatly encapsulated by the new album's simple and direct title. In musical terms, Condolences showcases Wednesday's growing obsession with the world of heavy metal and its endless possibilities for exploring tales of horror and violence. Produced by renowned studio guru Zeuss, new songs like anthemic first single What The Night Brings and the pile-driving Blood Sick still exhibit a dash of B-movie weirdness and are full of Wednesday's trademark twisted lyrics, but where previous albums were rooted in the worlds of punk rock and glam metal, Condolences is a full-on modern metal record with gigantic balls and the attitude to match. From the glowering menace of Good Riddance to the grandiose hellishness of the album's 7-minute title track, it's living, breathing, murdering proof that the Wednesday 13 of 2017 means business. And business is mean.   "It's non-stop touring once the record comes out," Wednesday concludes. "We just did our first video for What The Night Brings and the visuals are really cool. I've incorporated a lot of stuff I've been doing live, like this devil character I've been transforming into at shows, and that got worked in. We're taking the music, the imagery and the entire stage show up a level. It's gonna be a full-on theatrical stage production, so I'll be busy as fuck on stage! I've been doing this shit for so many years, I started thinking 'How can I make this fun again?'

So after reading that I hope you have an idea of just what we are in for with Condolences, the artists eleventh release!

The album opens with the short instrumental, 'Last Rites' before launching into 'What The Night Brings', a good if rather subdued beginning to the album. 'Cadaverous' is up next, with riff that reminds my off something off of Killers Menace To Society album!  'Blood Sick'  follows, a more rounded atmospheric sounding track than its predecessor. 'Good Riddance' comes pounding along next, a classic Wednesday 13 track if ever there was one. 'You Breathe, I Kill' is a straight up Wednesday 13 rocker, from a stalkers point of view! 'Omen Amen' returns the feel of 'Cadaverous',
a great song with a sing along chorus! 'Cruel To You' slows the tempo a little, buts still not exactly a ballad, but it is quiet possibly the closest thing that Wednesday 13 will ever come to writing a pop song!
'Eulogy XIII' follows, a sort of industrial soundscape instrumental with selected samples. if this were a vinyl releases I guess this would be the opening track to side two of the album. 'Eulogy XIII' quickly gives way to 'Prey For Me', which once again has a bruising riff that could have been lifted from the aforementioned Killers album!
'Lonesome Road to Hell' is a rather melodic track that showcases another side to Wednesday's song writing.
The albums penultimate track also happens to be its title track, 'Condolences'. An atmospheric monster of a song. Absolutely brilliant! Haunting and brutal in equal parts!
The album closes out with 'Death Infinity', another atmospheric and haunting track that continues the theme and feel of its predecessor, only this time from the point of view of someone passing beyond the veil of death. A great song, and brilliant way to close out the album!

Condolences is a fantastic album that see's Wednesday 13 dropping much of the humour from their songs and therefore presenting a somewhat darker and colder vision to us all.


Posted by The Sinister Angels realm at 18:44