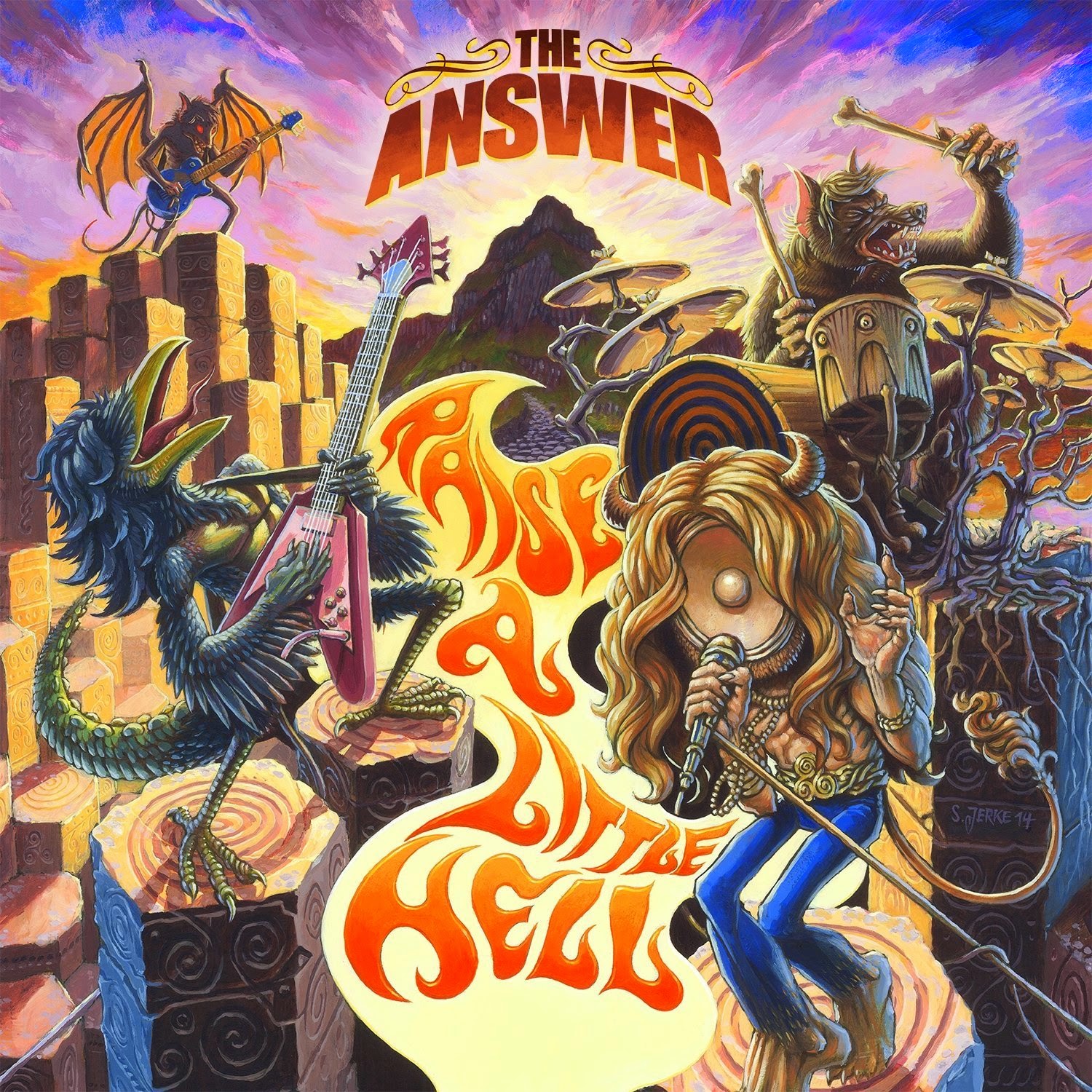 For the last 10 years, THE ANSWER have been trying to keep the Classic Rock / Hard Rock flame alive, carrying the traditional sound & style of the genre all over the world, and judging by their success, they do a good job at it.
The Answer are back with album number five and their second for Napalm Records – even better news there, as they have signed on for a further two albums with the label.
Entitled "Raise A Little Hell", the new record is some kind of a return to the style of their first albums with an updated production yet retaining a warm 'analog vibe'.
"Long Live The Renegades" is a great opening statement, from the Thin Lizzy approved guitar solos through to Cormac Neeson showing off his fine vocal swagger. The first thing we notice is the classy production, harking back to the simple purity of albums like ‘Rise’. Massive props then to long-time friend and producer Will Maya for putting The Answer back where they belong. If ever there was a fifth member of The Answer – somebody who truly knows their sound, then this is he.
"The Other Side" and "Aristocrat" are up next, and are mildly reminiscent of the kind of stuff Aerosmith used to crank out without breaking a sweat. "Aristocrat" in particular, oozes with a sleaze and swagger of the Boston legends’ ‘Toys In The Attic’ and ‘Rocks’ heyday.
"Cigarettes & Regret" is a cover of sorts – originally penned by Jaren Johnson and Neil Mason from The Cadillac Three, but as far as I am aware they never recorded it. It’s not the best song The Answer have ever recorded (their back-catalogue is crammed too full of them to pick just one), but it could perhaps offer them their best chance yet of crossing over into the mainstream, with it’s almost Bon Jovi-esque hooks and commercial appeal. The hit single they’ve been waiting all these years for? Quite possibly. Yes.
Conversely, "Last Days of Summer" is a five minute-plus blues jam and if you were ever in any doubt that Cormac Neeson is in possession of one of the finest set of vocal chords in Rock today, you need look no further than here. Simply breath-taking.
Shifting the pace down a gear or two, "Strange Kinda Nothing" is easily the finest ballad The Answer have penned to date. More evidence here of Neeson’s awesome vocal range, but with the addition of some beautiful acoustic guitar from Paul Mahon.
Back to the Rock then, and rhythm section Micky Waters (bass) and James Heatley (drums) get to flex their muscles on "I Am What I Am", complete ass-kicker with gang vocals on the chorus, proving Neeson isn’t the only singer in this band, followed by "Whiplash" – another hard-hitter in the classic Answer vein.
At this stage, the album is just getting better and better with every track, and it seems the band can do no wrong.
And then they pull out "Gone Too Long". If this isn't their best song yet… a hit single in waiting, that’s just crying out for an atmospheric video to go with it, and destined to be a massive live favourite. I defy you to listen to this song and not fall in love with this band.
"Red" sees The Answer cranking up the glammy sleazy quota again, followed by "I Am Cured" – another bonafide rock classic that only The Answer seem capable of pulling off these days, before rounding out the album with title-track "Raise A Little Hell", and a return to the signature bluesy sound with some edge.
The Answer have always offered exciting options and great value for money – whether they be limited editions or bonus tracks, and "Raise a Little Hell" is no different.
This Limited Edition Digipak includes a bonus disc containing 6 bonus tracks unavailable anywhere else.
With "Raise A Little Hell" The Answer haven’t simply returned to the blistering form of their earlier output, they have in fact recorded the album of their career – an album that, with a big enough push and a carefully selected touring schedule, could see them finally achieve their true potential.
If you never liked this band - or never heard them at all - do yourself a favour and try "Raise A Little Hell". This is pure Classic Rock / Classic Hard Rock as it should be done.
Highly Recommended.

Posted by The Sinister Angels realm at 21:16