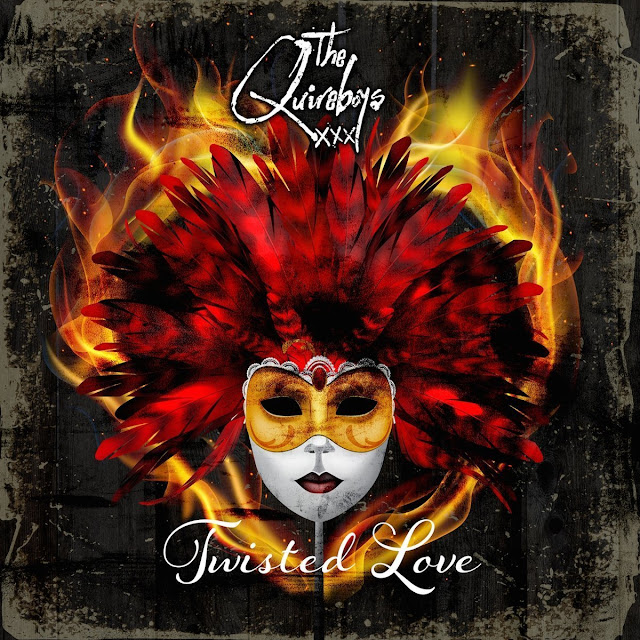 The Quireboys return with their tenth studio album in the form of Twisted Love, once again opting to record in the Swedish town of Klippan, where they recorded the previous CD and again  choosing to produce it themselves along with the aid of Martin Ekelund.
One of the first things that becomes evident upon listening to Twisted Love is that despite there only being two original members in the band,  front man Spike (Jonathan Gray) and guitarist Guy Griffin, there is a focus and chemistry that really brings the best out of the guys. Boasting a line-up which has been in place since 2013, there’s no denying that it’s benefiting them massively, you can see it in their live shows too. It’s strengthening them and allowing them to turn in some of their best songs of their career.
Songs like “Stroll On” and “Shotgun Way” sound like they could have come from their early '90s efforts. Meanwhile, tracks such as “Ghost Train” and “Breaking Rocks” sound much more akin to the more modern sensibilities of recent albums. But all of them are dripping in that classic Quireboys sound!
The dual guitars of Guy Griffin and Paul Guerin complete with their backing vocals tie in neatly with Keith Weir’s keyboard melodies, really outdoing himself this time around. Title track “Twisted Love” also features blues powerhouse Lynne Jackaman on backing vocals, trading barbs with Spike, the sultriness lingering in the background yet notably obvious. "Killing Time" is reminiscent of Aerosmith’s Eat The Rich only much more earthly. “Gracie B”, originally from the previous, acoustic-driven album St Cecilia and the Gypsy Soul. It was given a full electric outing on their tour this year and it sounded massive. Re-worked based on that and included here, the standout of its original album, it’s been transformed into a new beast, even more dangerous than its original form.
Meanwhile the engine room of Dave McCluskey on drums coupled with Nick Mailing’s bass has helped propel the band to a new level of quality, the years of playing and recording together is obvious, something you can only get with a regular line-up. There’s a deft hand involved for the pair of them, Dave’s drums especially featuring more prominently this time around due to the harder edge Spike had promised this time around.
As before, the band have produced the album with Martin Ekelund of Bonafide and once again, he’s managed to get the best out of them.
Promising “no ballads” this time around seemed like a weird prospect for a band like The Quireboys, especially when some of their best songs fall into that category but at no point do you wish they’d drop a gear and include a sequel to I Don’t Love You Anymore.
Their raucous singalong anthems are at the forefront in "Twisted Love" and it’s easy to pick out which will be the live favourites

Twisted Love is very highly recommended, and there has never been a band more deserving of their renaissance than The Quireboys. Constantly putting out brilliant albums, relentless touring and a band you can never accuse of turning in a bad performance, you’ll be hard-pushed to find a band to beat their consistency.

Posted by The Sinister Angels realm at 08:52