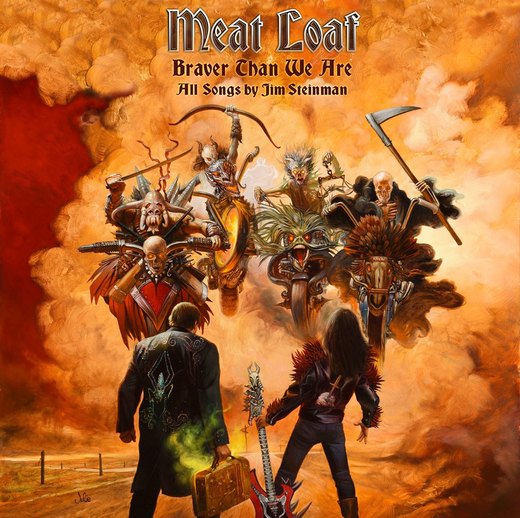 Now Meatloaf albums have always a certain amount of hit or miss about them, but in general whenever Meatloaf has collaborated with song writer / producer extraordinaire Jim Steinman they have been hits. These collaborations have included the mighty Bat Out Of Hell and Bat Out Of Hell Two albums and Dead Ringer release. So I had huge hopes for this album, and even wondered why it wasn't being released as Bat Out Of Hell Four, but upon giving it a few good listens I understand them deciding not to tarnish the Bat Out Of Hell legacy. Don't get me wrong, Braver than We Are is by no means a poor album, in fact it is a bloody good solid album, but when it is compared to the previous collaborative releases of Messrs Meatloaf and Steinman it just falls short. The project also showcases another reunion with vocalists Ellen Foley and Karla DeVito (from the smash hit 'Paradise by the Dashboard Light') on the epic song and first single ‘Going All The Way’.
Put simply... Meat Loaf can't perform like he used to. The man is sixty-eight years old. His last few albums, 2010's Hang Cool Teddy Bear and 2011's Hell In A Handbasket have shown a massive drop in vocal quality. He just can't belt it out like he used to. His voice just simply lacks the power that it used to have, and that is such a pity, because had this album been recorded when Meat's voice was at its most potent then this album could have been truly great.
The ten tracks on the album are mostly songs pulled from musicals Steinman has written, and a rehashing of Bonnie Tyler's hit 'Loving You Is A Dirty Job', and I'm not sure how I can ever listen to 'Skull Of Your Country' without being reminded that it was turned into something so much better in "Total Eclipse Of The Heart". I understand Steinman recycles, but leaving in the "turn around bright eyes" motif, when it's already world famous in another song, is a decision that begs me to compare this album to ones that are worlds better. The larger than life character of Meat Loaf has been reduced to a singer who can't keep up with any of the women guesting on these tracks. He is flat out out-sung not only by them, but in places by his own backup singers. It's shocking how old he sounds, missing notes and lacking any of the power or passion we've come to know from him. And that is such a shame as had his voice been up to  the job then this album could have been something special. I love the fact that I get to hear Steinman tracks that I hadn't heard before such as a song written for the defunct project The Dream Engine, 'Speaking In Tongues' and 'More' which was written for the Batman musical.
Meat Loaf is a legend, but this new album sadly fails to live up to the high standards that Meatloaf and Jim Steinman have set with their previous collaborations.

Posted by The Sinister Angels realm at 11:12