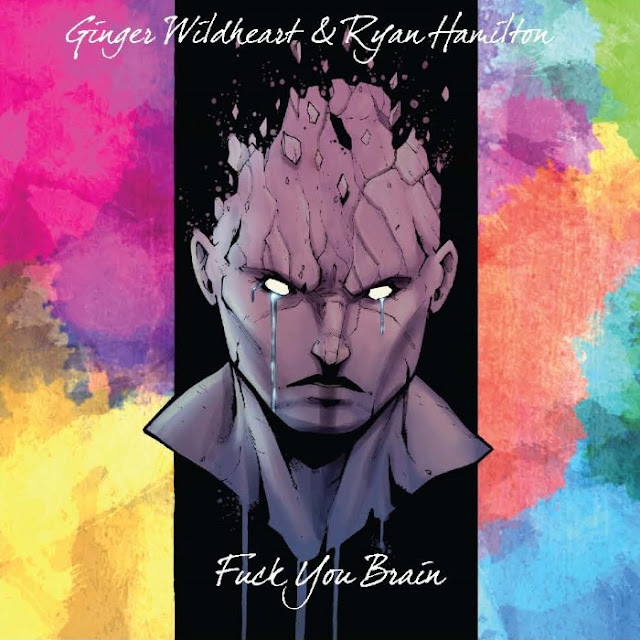 Ginger Wildheart and Ryan Hamilton, too immensely talented musicians who have made no secret of their long running battles with depression have decided to get together to record and release a charity single, with the proceeds being donated to The Samaritans to help with the support that they provide to so many, especially around this time of year.
Lets discuss the music first before I post what those involved have to say about the project.
The lead track, Fuck You Brain is a great up beat rocker, that sees the lead vocal being shared by all those involved. The perfect blend of rocking guitars and pop melodies, with some wicked pedal steel guitar courtesy of Maurice Hipkiss
The Ep's second track, Ode To The Idiots, is written by Ryan Hamilton, and recorded during the sessions for his recent pledge campaign (more on that album to follow). Its short and sweet, but a great pop punk song non the less.
the Ep's final track Dogbreath is an instrumental, and about as mental as it gets. coming across as a mix of Patience and Gratitude and Mutations Wham City.
A great little Ep that's well worth having in your collection, even more so considering the cause that its raising money for!


The EP is available HERE


Now over to those involved to tell you about this project:

A message from Ginger Wildheart:
"Ironically I struggled even getting to the studio to record my parts for this single, deep as was in my current battle with depression. The same attack that almost killed me a week ago.

My depression wants me dead. So far I'm winning on weight advantage, but the battle is never over.

This is a very vulnerable time of year for sufferers of mental health issues, and suicide sees a marked increase over Christmas and New Year. So the help provided by The Samaritans is invaluable, especially over this period.
Please help us in helping someone this year.

Obviously severe depression is not seasonal, but the reminder that you yourself are 'not doing so bad' is reinforced over this Festive holiday. If you have a healthy family, loved ones who are safe, a warm home, a job and a hot meal staring at you at some point, then you are doing better than many people this Xmas

To simply say "thank you" for what you have, please donate for those suffering from suicidal thoughts, struggling with depression/anxiety, or for those helping such a person through this holiday period."

message from Ryan Hamilton:
"Ginger and I have both been very vocal about our struggles with depression and anxiety. Mental health issues like these deserve much more attention, and respect, than they get.

After we wrote "Fuck You, Brain" we weren't quite sure what to do with it. Ginger had the idea to use it as a charity single, and asked if I was ok with that. I couldn't say "YES!" fast enough.

I hope everyone enjoys the new music and fun collaboration. I also sincerely hope we can raise a good deal of money to raise awareness, and do some good, for an issue very important to us."
A message from Givvi Flynn:
"When Ginger asked me if I'd like to get involved with this single, it was a no-brainer. My own mental health requires daily management (as does that of many friends and colleagues) so I fully appreciate how dark some days can be - why wouldn't I want to do something which might help those suffering similarly?

I hope the song raises money and awareness for a great cause, it was a pleasure to be part of such a positive, rewarding venture."


A message from Emily Ewing:
"It has been a real honour to have my vocals feature on this track. The song has such an important message. One that speaks to me personally as well.

My anxiety is an on-going battle, some days are certainly worse than others. There are times when I can't see light at the end of the tunnel. Panic attacks have also played a major role in my life. As a society we need to stop saying "Get over it", "You have nothing to be sad about". Just because you can't see it, doesn't mean it's not there or happening. It's hard to pretend everything is fine when it's not.

I hope this song raises awareness and lets anyone going through a hard time with mental illness know you are brave to face it everyday and you not alone!!!"

Again the Ep is available HERE

Posted by The Sinister Angels realm at 19:34