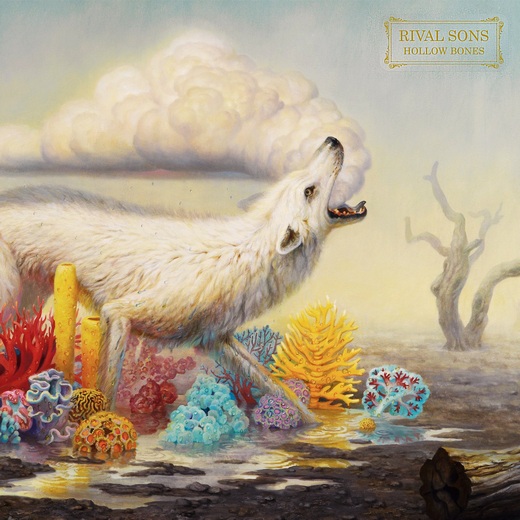 Although Long Beach classic rockers RIVAL SONS released their first album all the way back in 2009, Before The Fire, things really started to happen for them in 2014 with Great Western Valkyrie , an album which charted in fourteen countries around the world and saw the band appear on a wide array of prestigious television and festival appearances as well as supporting some of the biggest names in rock history. Now the band returns with their latest effort "Hollow Bones"  and have even being hand-picked recently to tour with the mighty Black Sabbath on their farewell tour for the remainder of the year.
Rival Sons appear to be able to do no wrong, and "Hollow Bones" is no exception.
Album opener and leading single “Hollow Bones Pt.1” immediately sets the tone, as Scott Holiday‘s fuzzy guitar carries through as a signature sound throughout many of these groove melody tracks. Its link with its counterpart “Hollow Bones Pt.2” later in the record syncs beautifully, like two long lost siblings reuniting.
“Tied Up” and “Thundering Voices” among others follow suit, while retaining their own unique and individual presence with subtle touches and arrangements. This is no doubt contributed not only by the band’s talents as musicians and songwriters but also by the talents of two-time Grammy winner Dave Cobb taking on producer duties once again.
Outside the obvious expectations that deliver and exceed in fine rock n’ roll, the album has some of its strongest moments when the band strips back the wall of sound.
Bassist Dave Beste and drummer Michael Miley earn serious brownie points for rhythm sections as their precision playing holds this record together and is a fierce driving force. They also know how and when to hold back; a quality in musicians equally as admirable and impressive as an epic performance.
In tracks such as “Fade Out” and in particular the haunting, Damien Rice-esque album closer “All That I Want”, these qualities bare great results as they allow enough space not only for a different style of song, but also for vocalist Jay Buchanan‘s vocal delivery to be as strong and passionate as possible. And man, does he deliver!
Soulful, funky, hard-edged, colourful, classic. That's all here in "Hollow Bones", Rival Sons' most varied production to date.

Posted by The Sinister Angels realm at 23:47