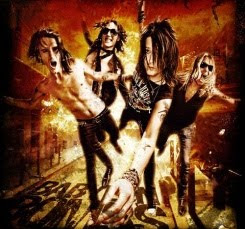 Babylons Burning is the latest release from Swedish rockers Babylon Bombs and its a great album.
Opening with three really strong tracks in 'Liberation, Babylons Burning and Resurrection Love, they go straight for the jugular! The band manage to mix up their sound a lil on this album which is a really good thing, adding a lil alternative rock feel to some songs like Resurrection Love. The problem is that the rest of the songs don't quite match up to the opening three, I'm not saying there's anything wrong with them, there are plenty of great songs like 'Fade Away', 'Goodbye Good Luck' ' Its Alright' and ' Winding Road'.
Dani is in fine voice and the band sound really tight, unfortunately the opening three tracks just set the bar too high for the rest of the album to follow.
This is still a great album, but it could have been a contender for album of the year!