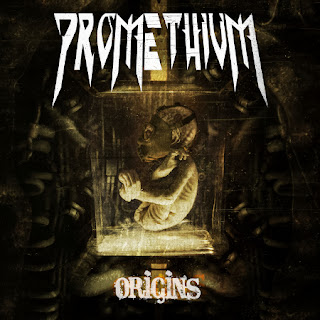 October 7th sees the release of Lancaster based metal bands sophmore album, Origins, and its an album that is well worth checking out!
Filled to the brim with killer riffs, a real driving rhythmn section, well constructed and STRONG songs and some great vocal deliveries from lead vocalist Gary McGahon, who manages to manoeuvre his voice from classic hard rock styling to metalcore screaming as the songs require.
What is really notable here is just how well the band manage to restrain themselves, and succeed in not over doing the solos and other little indulgences. In fact Dan Lovett-Horn's and Rossi's guitar work is damn near perfect, the riffs on show here are truly sublime.
Standout tracks for me have to include album opener, Won't Break Me, (which really sets the scene for what is to follow with the rest of the album,) The Art Of Hurting, Rain (The albums ballad, well almost!), Plagued By Evil and the albums surprise closing title track, Origins, a short instrumental track that opens withs a thunderstorm which leads into a beautiful acoustic guitar, a subtle and touching way to close out a very strong album indeed.
If you have never heard of Promethium then shame on you as they are a very strong and promising band that have now delivered two great albums, and whats more |I have this gut feeling that they are still capable of producing a hell of a lot more!

Origins builds on the solid groundwork set down with 2011's debut Welcome To The Institution, and showcases just how the band are developing further as both performers and songwriters ta boot.

Posted by The Sinister Angels realm at 21:26