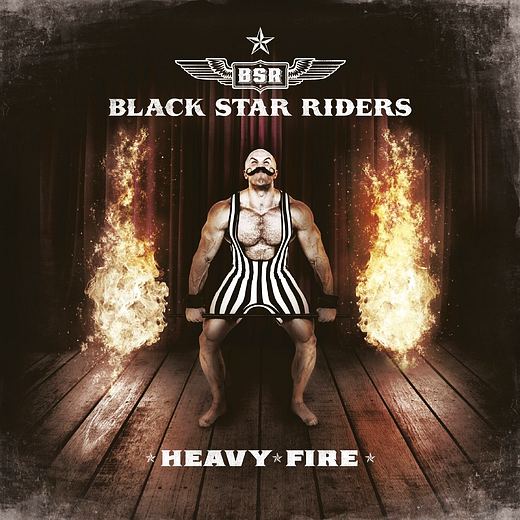 Heavy Fire is the long awaited third album from Black Star Riders. Black Star Riders were created in 2012 by members of the most recent line-up of Thin Lizzy, and delivered widely acclaimed music in their first two records ‘All Hell Breaks Loose’ and ‘The Killer Instinct’ which established Black Star Riders as one of the finest present-day rock ‘n’ roll bands.
The title track 'Heavy Fire' jumps out of the speakers from the very first second you hit the play button. It punches the air out of you as it declares there is no room for complacent listening here. Crank it up and succumb!
A mid-tempo yet power-packed track which does justice to the signature Black Star Riders sound - crisp and raw.
This essence is carried into 'When the Night Comes In' which is one of the catchier songs on the album with awe-inspiring vocals, cool lyrics and an infectious chorus. The song shows the new approach the band adopts while still upholding its heritage in spirit.
Remarkable musical ingenuity is showcased in 'Dancing with the Wrong Girl' which has a heavy classic spirit while 'Who Rides the Tiger' delivers a monster groove.
There’s been no compromising with the band’s distinct quality and the record upholds the appeal of heavy rock through and through as evident in the compact and powerful rocker 'Ticket to Rise' also featuring soulful backing vocals.
There is a nice shift in thought process from the laid back 'Cold War Love' to the heavier 'Testify or Say Goodbye' which is one of the finest songs on the album. The latter bears the magnificence of classic rock in elements like its traditionally composed chorus.
'Thinking About You Could Get Me Killed' starts with an epic bass line and is rhythm-wise wonderful. 'True Blue Kid' further demonstrates versatility within the magnitude of heavy rock while 'Letting Go of Me' provides a perfect finish to the album by leaving a hard-hitting impact.

The Limited Edition includes the atmospheric 'Fade', another great piece of finest melodic hard rock with a feel that brings to mind guitarist Gorham days with 21 Guns.

Just like the Thin Lizzy of old, Black Star Riders rely heavily on the glorious power of their twin guitar attack, but play with a greater sense of sustained urgency than their former incarnation tended to do.
As a result they have produced an album that is certain to prove fervently popular when they hit the stage this year – every song is designed to get you out of your seat and have you leaping around.

Posted by The Sinister Angels realm at 20:03