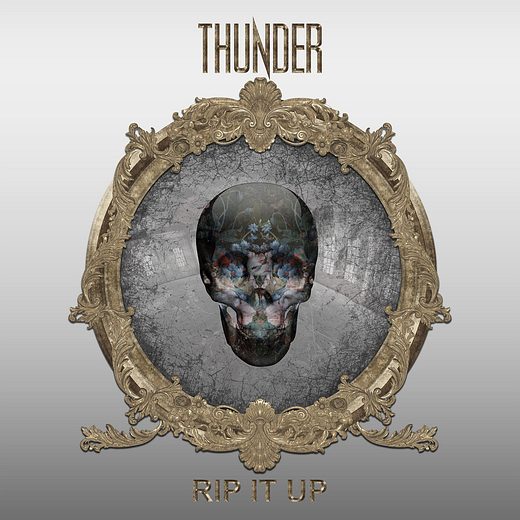 Earlier this month British classic rock stalwarts Thunder returned with their eleventh studio album. Now I have always been a big fan of Thunder, and I can honestly say that I do not believe that they guys have ever put out a bad album. Sure some have been less instant than others, but the songs are performances have always been of the highest quality, and hey every now again they guys hit the magical chemistry a release albums that have that little special something, a certain energy and magic that makes them stand out. I'm talking their classic debut, Backstreet Symphony and Robert Johnsons Tombstone. Well guess what, I think that they have only gone a done it again with Rip It Up!
Once again the album is built around the twin pillars of Luke Morley’s songs and vocalist Danny Bowes interpretive ability, as the duo soar above the rock solid rhythm section of Chris Childs and Harry James, while Ben Matthews gives the band additional sonic armoury.
The album opens with 'No One Gets Out Alive', a statement of intent built in the classic Thunder mould, setting out the stall for what is to follow. Title track 'Rip It Up' is up next, with its plodding classic rock riff that breaks down into a great sing along chorus. 'She Likes Cocaine' follows proving to be a right ripsnorter of a track before the semi-ballad ‘Right From The Start’ take the pace down a little, yet manages to turn up the intensity. 'Shakedown' sees the guys picking up the pace once again with another ripper of a track. 'Heartbreak Hurricane' follows, and is one of my personal favourite tracks from this album, if not from the bands entire back catalogue! 'In Another Life' is a great soulful bluesy work out, really showcasing Danny's marvellous voice.
The albums gathers pace with 'The Chosen One', which proves to be yet another great little rocker! 'The Enemy Inside' follows, upon which Morley delivers some clever some oxymoronic wordplay in the lyrics, while he adds a Who style power chord intro and an accompanying Led Zeppelin riff to the stonking 'Tumbling Down'. Yet two more great classic rock tracks! The album closes out with the stylish blues-tinged melancholia of ‘There’s Always A Loser’, completing one of the best and most rounded albums that I have heard in many a year.

Do yourselves a favour and go out and grab a copy of this brilliant album. I sincerely doubt that a better classic rock album will be released this year, possibly even this decade!


Posted by The Sinister Angels realm at 18:11