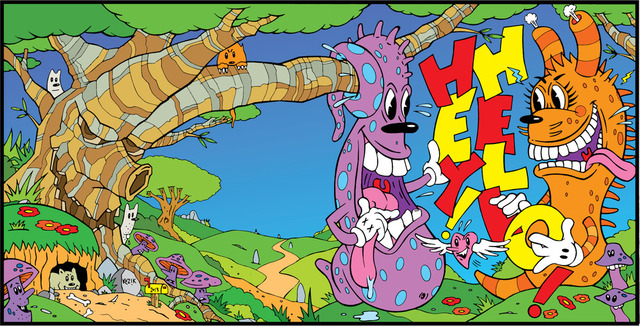 Hey! Hello! consists of Victoria Liedtke (Vocals) and Ginger Wildheart (Vocals, Guitar, Bass, Drums and basically everything else!) and was recorded as a Pledge Music exclusive with the aim to release three singles commercially and the other tracks being exclusive to this release. Ginger describes this project as noisey pop, but to be honest I have to disagree, this is a great pop / rock album and one of the best products that ginger has ever released. Dont get me wrong, the past copuple of years have been rather hectic for the Ginger one, where as most artist struggle to put out one album every three years, Ginger has released six albums worth of material in just nine months, a totally unbeliev able feat in itself, yet alone when its sixty plus tracks of quality music with no fillers!
To begin with there was the mighty 555% tripple album, thirty killer tracks that showcased Gingers songwriting range, an album that I truly thought would be hard to follow, and then Ginger goes and puts out Hey! Hello!. a totally awesome album. Ten brilliant songs that just fit together to make a truly special album. Dont get me wrong, 555% was an amazing release, thirty great songs, but by its very nature it was a little eccletic where as Hey! Hello! is just one consistant album, with the tracks flowing effortlessly from one to the next, and to be honest the album only has one fault, its too bloody short!
From the opening riff of Black Valentine through to the closing horn sections of We're Out Of Here, the quality never dips below excellent. I was truly suprised at just how good this album sounds with Ginger handling all the instruments, including debuting his drumming skills on record for the first time, but it really does sound great. This Pledge Music exclusive album features two tracks that were originally written with other artists in mind, but for various reasons ended up being used for this project, those being, Swimwear, originally written with michael Monroe in mind and Thrill of It All which was originally planned for Courtney Love, but I am so glad they became Hey! Hello! tracks, especially Swimwear which just has an amazing feel good factor to it.
Victorias vocals compliment Gingers perfectly throughout, something we learned via the 555% project and together they create a beautiful sound, I truly hope that Ginger deems it worthy to follow up this release with more Hey! Hello! because I honestly beleive that they have something really special here!

A truly great album and a worthy follow up to the hugely successful 555% project. Pledge before you miss out, and grab the singles when they get released or end up regreating it!

Posted by The Sinister Angels realm at 18:28