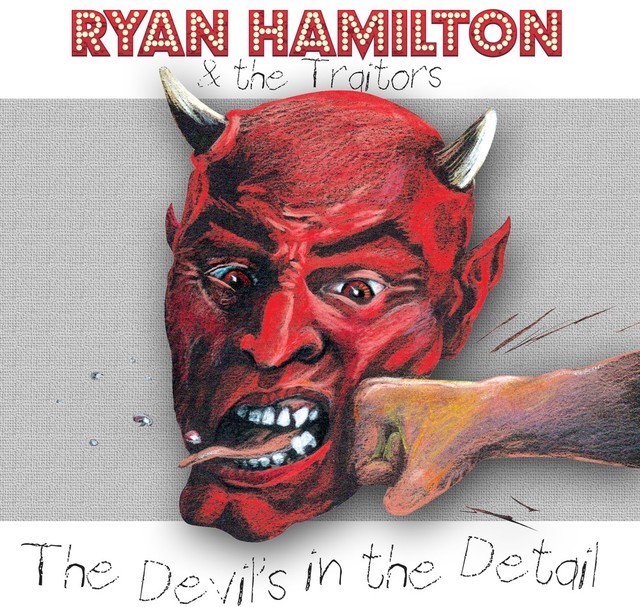 The Devil's In The Detail is the brand spanking new album from Ryan Hamilton and the Traitors, a trans Atlantic rock n roll band hailing from Texas and the UK. And what a bloody debut. Great bounce filled rock n roll, with a tremendous sense of melody. Incorporating so many musical elements its unbelievable, from country to blues to punk to out and out rock n roll. What a refreshing band. This, their debut album has been financed through a blinding pledge music campaign, hence the 2016/17 release dates (pledgers were lucky enough to get their hands on this brilliant album last year!).
The albums kicks off with the bouncy and rather excellent 'Smarter', which flows into the equally brilliant 'We Should Never Have Moved To LA', before the tempo slows a little for the rather laid back 'Anywhere', with its bluesy overtones. Next up comes the beautiful 'Heavy Heart'. A really beautiful ballad with some great harmonies and soul searching lyrics! Surely one of the albums many highlights. The rather fun 'Scottish Mud' is up next, picking up the pace a little. Yet another great song. Next up is the excellent acoustic driven 'Back In Time', a beautiful song that features Ryan taking a look back in time. 'The Gulf Of Mexico' follows, with its chugging main riff. possibly the heaviest song so far on the album, bloody brilliant non the less. Hot on its heels we have 'Cheaters Never Change', a real blues country mix. Yet another brilliant song! 'Drugs and Fashion' picks up the tempo and the mood once again, returning to the bouncy rock of the albums first couple of tracks.
'Strength In Numbers' is a great song about a defiant spirit, a great up-tempo song that has a brilliant energy to it. This could be killer live!
The albums penultimate track is 'Don't Say I Told You So', a beautiful duet. this song sends tingles down my spine. Beautiful and haunting!
'It Ain't Easy' closes the album out, a great fun song with a proper country feel to it, and a nice snarling surprise hidden inside if you are patient enough to wait for it!

Posted by The Sinister Angels realm at 18:51