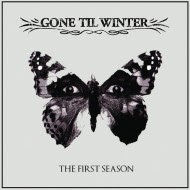 Manchester based Gone Til Winter unleash their self released debut upon the world in the form of The First Season.The inevitable comparisons with the likes of Nightwish, Evenescence and Lacuna Coil are bound to be made, yet Gone Til winter offer up a less polished, more organic sound to my ears. Telena Cuthbert has a great voice, powerful and emotive, with a great range that sits on top of the heavy riffing just as comfortably as it does the subtle acoustic sections. the songs are pretty well put together, and the musicianship is all good.
I think the band could benifit with the helkp of a top producer just to add that final edge / polish to the tracks, as sometimes they just seem to lack something that I just cant put my finger on, but thats not to say that there is anything wrong with them on the contary they are all solid, just not outstanding.
Stand out tracks for me include Utopia, Release, Constant Retreat and Solemise.
On a whole a solid debut that shows a band with a lot of potential,

Posted by The Sinister Angels realm at 16:10