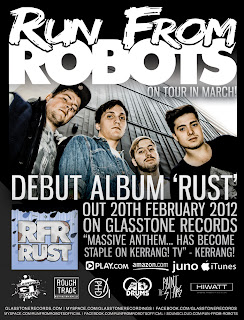 RFR (Run From Robots are a "hard working" 4 piece punk rock band from the UK.  They have a sound that the fans of Blink 182 and Green back will probably love, that sort of raw pop punk that has done so well commercially over the last few years. Some great riffs and tons of sing alongable melodies, coupled with a healthy dose of attitude makes for an enjoyable record.
I can see this band acheiving considerable success given the right backing and support, but only time can tell.
The songs are strong and delivered with conviction, the production is crisp and well the band... they rock. Stand out tracks include Wolf Spider, On Top Of The Game, Raining Nuts and Shooting Bolts and Umbrella.
A promising album that has gotten me wanting to hear more!

Posted by The Sinister Angels realm at 16:28