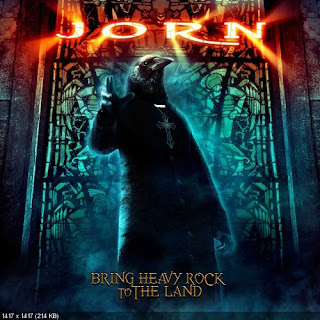 
Jorn Lande returns with his latest studio album, the first since 2010's tribute to the late great Ronnie James Dio, Dio with Bring Heavy Rock To the Land. (Although 2011 saw the release of the stunning live package, Live In Black!)
No one, and I mean NO ONE can afult Jorn's vocals, with a voice that is the perfect cross of Ronnie Dio's and David Coverdales, this man was born to sing rock! And thats just what he does on this album, eleven tracks of pure (and might I say brilliant) classic hard rock and metal. Sure the lyrics are occassionally cliche'd, but hey so are the lyrics of some of the best rock anthems to have ever been recorded, thats one of the things that makes great hard rock songs!
Msically every song is amazing, the production is really top notch, and Jorn's voice seems to be in fine form.
After a couple of listens I have alreader found a few new Jorn classics, Ride To The Guns, Chains Around You, Ride Like The Wind, Black morning and I Came To Rock are all anthems in the making.
If you are a fan of Jorn's previous releases, then you are surely going to love this album, and if you are a fan of great traditional hard rock music, then check this album out, you wont be disappointed.
So with this album Jorn really does "Bring Hard Rock To The Land".

Posted by The Sinister Angels realm at 11:04