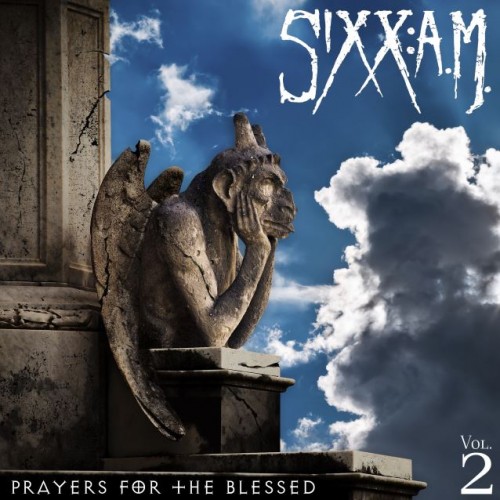 
SIXX: A.M. bassist Nikki Sixx along with guitarist DJ Ashba and vocalist James Michael release the second half of their 2-part blazing hard rock albums, Prayers For The Blessed Vol.2.
“Vol. 1, Prayers For The Damned” and “Vol. 2, Prayers For The Blessed” were both written and recorded at the same time, they are companion pieces carefully structured to kick the bands own sound print upstairs to its fullest tilt and it brings the demand to the fans of Nikki Sixx.
You can not ask for much more hard rock swagger from the heart and soul to the fans than this. Sixx et al deliver. Coming off their 2015 tour Nikki Sixx had stated that being onstage really influenced the way they connect and write, and you can really hear the effects throughout the two albums, having a much more solid consistent and band sound to them than the bands previous releases.

This monster album kicks off with “Barbarians (Prayers for the Blessed)” a fist pumping anthemic track that sets the tone for the rest; big vocals and a blistering lead really make this track stand out. “We Will Not Go Quietly” is next up. There is more of a groove on this one. It hits hard, but the melody continues to be the focus.
Stepping into the grooving motion of “That's Gonna Leave A Scar” to the 'rockpertic' show of “Maybe It's Time” showcases the diversity that lives and breathes deep within the talents of Nikki Sixx.
“Wolf At My Door” has some dirt and grit breathed in, while the heartfelt ballad “Maybe It's Time” strikes the emotive. Guitarist Ashba really delivers his skills on “Catacombs” and the hardest rock sound to come from the album falls on track, “The Devils Coming.” Opening acoustically “Suffocate” leads to a hailing crunch when the chorus kicks in.

The songs are brilliant, the production is excellent, bringing the best out of each song, and the band are performing at the peak of the talents, Go and buy it now. Simply A Must

Posted by The Sinister Angels realm at 19:37