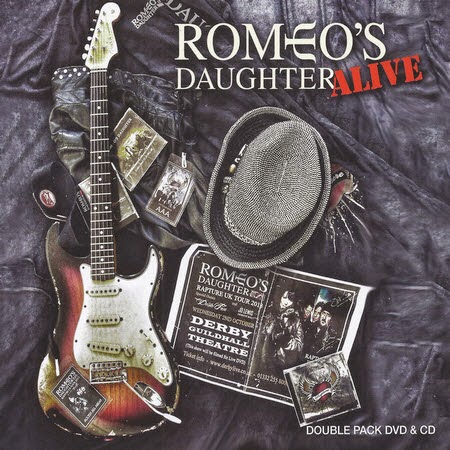 "Romeo's Daughter are one of Britain's finest AOR mainstream rock bands fronted by Leigh Matty, recently voted Number 5 Lady Rock Singer of all time in Classic Rock Magazine. Alive is a live DVD filmed at the Derby Guildhall and is packaged with a live CD. The fans have been requesting a live DVD for years and they can finally get one! The band's last album Rapture , was released in 2012, has been critically praised worldwide for its astounding song writing, performance and production and the first single from the album, 'Bittersweet', is in Classic Rock Magazine s 'Top songs of 2012' chart. The band's pedigree is second to none, with each member having previously worked at the highest levels with artists such as: Bonnie Tyler, Whitney Houston, Roxette, Meatloaf, Tom Jones, John Parr, Dexy's Midnight Runners' Kevin Rowland and, Ex GoGo, Jane Wiedlin! Their eponymous debut album released in 1988 was produced by Mutt Lange and John Parr and released on the Jive label. During a promotional tour of the U.S.A the first single Don't Break My Heart, leaped up the US Billboard Hot 100 Singles Chart. The calibre of their songs attracted many established artists; Heart covered the single Wild Child on their 3 million selling album Brigade, achieving No. 2 on the Billboard Rock All Play chart. Eddie Money, Bonnie Tyler and the recently reformed Steps too, have had recording successes with other Romeos' titles. Their track Heaven in the Backseat was also the opening track for the film, Nightmare on Elm Street 5 . This album has subsequently been remastered to 24 bit standard from the original source tapes and released on Rock Candy records. It includes 3 bonus live tracks, the story of the making of the album, previously unpublished photos, all spread out over a 16 page full colour booklet. Their second studio album, Delectable was released in 1993 on Music for Nations and was much more like a live album in its feel. It was produced and recorded by the band and Andy Reilly, and was later mixed by Steve Brown (The Cult, Manic Street Preachers and Wham). Delectable too has been remastered to the same quality and released again by Rock Candy records. It includes one bonus track, details about the making of the album, an interview with the band and additional photos spread out over a 12 page full colour booklet. Their 4th album, Spin, will be released in 2015 to coincide with their performance at HRH. The DVD is NTSC Region 0 Power and Sophistication Kerrang! / Romeos Daughter trample most of Britain's melodic rockers underfoot and deserve success on their own terms. Steve Beebee, Kerrang! 14th November 2014 Yardbirds, Grimsby 15th November 2014 The Railway, Bolton 21st November 2014 - The Borderline, London 22nd November 2014 - The Rescue Rooms 14th March 2015 HRHAOR Festival May 2015. "

Regarded as one of Britain’s finest AOR mainstream rock bands, ROMEO'S DAUGHTER are releasing "Alive", the first full live concert footage of Romeo's Daughter on stage, available as a double pack containing both a DVD and a live audio CD of the show.
Fronted by the sexy Leigh Matty - recently voted Number 5 ‘Lady Rock Singer of all time’ in Classic Rock Magazine - “Alive” was recorded at Derby Guild Hall in October 2013 as part of the 'Rapture' tour, their great comeback album.
The band’s pedigree is second to none, with each member having previously worked at the highest levels with artists such as Bonnie Tyler, Roxette, Meatloaf, John Parr and more.
Romeo's Daughter eponymous debut album released in 1988 produced by ‘Mutt’ Lange and John Parr was a big success, followed by the wonderful 'Delectable' in 1993.
After a long hiatus, the band’s last album 'Rapture' was released in 2012 and has been critically praised worldwide for its astounding song writing, performance and production.
“Alive” is not the typical live record, it's more like a greatest hits played live, as there's few crowd noises and the overall sound is pristine and clear.
The band struck out early with material from last album Rapture, which still captures all of Romeo’s Daughter’s style and verve with a little more besides. The easy charms of the melodies and Craig Joiner’s understated guitar worm their way deep inside your brain.
The new songs as the tuneful "Bittersweet", the jumpin' "Keep Walking", the catchy "Talking Love" and the superb ballad "Lightning" (played in a more mid-tempo AOR manner here) are mixed with the classics like "Attracted To The Animal".
There's also a previously unreleased track called "Perfect Plan", a melodic rocker with a contagious chorus. The set also included the rarely played "Dancing Slow" from album Delectable, and one of my favourites from the band.
We have an intimate, acoustic version of "Will Be", just with Joiner on guitar and Leigh delivering an emotive vocal performance.
The back end of the set is chock full of gems from the wonderful, heart-wrenching "Cry Myself to Sleep" to the hit "Heaven in the Back Seat", all played in a more rocking versions than the originals.
The last song was the full-on rock of "Wild Child" which drew a fanatical response as it reminded us how it was ‘poached’ by Heart for their Brigade album.
"Alive" is a very good release by Romeo's Daughter, where more than a 'live crowd' record the band offers different versions of their songs into a live stage context. They are so polished that at places sound like a studio album.
However there's a different vibration emerging from these great songs, a rocking spirit which fit the melodies really well. An enjoyable CD from start to finish while we wait for the new studio album 'Spin' to be released next year.
"Alive" is available with the first 200 copies housed in a unique limited edition presentation box, so be quick.

Posted by The Sinister Angels realm at 10:13