Well "Rock Or Bust", its been a long time coming, and boy, its been a little eventful as of late in the world of AC/DC!
It has surely been a turbulent time for AC/DC. Guitarist Malcolm Young recently suffered a stroke, which left him with a case of dementia. Also, drummer Phil Rudd is currently facing charges of 'threatening to kill' along with meth and weed possession.
Regardless, AC/DC march forward, promising that neither dilemma will affect the band’s new album nor their upcoming touring plans.
Produced by Brendan O'Brien who was on board for the hugely successful Black Ice in 2008, "Rock Or Bust" opens with the title track declaring: "You hear the guitar sound/playin' nice & loud… in rock we trust, it's rock or bust".
These aren't just musicians, they're rock'n'roll soldiers. Confirmation from the band that Malcolm Young had retired due to the ongoing health issues came with an assurance the band would carry on and that Malcolm and Angus Young's nephew, Stevie Young, would fill Malcolm's role.
"Turn the amps up high ... the crowd's gonna hit the sky"... Brian Johnson howls on the opening title-track, while Phil Rudd's utterly dependable, familiar rock-solid beat is there and Angus' guitar solo kicks in at the two-minute mark like a surgical strike. It's meat and potatoes stuff for one of the biggest, loudest band's in the world, but after a difficult period for them internally, it's a mighty solid start.
"Play Ball", the lead single from the album features a typically solid, unmistakable groove with Rudd and Williams locking into an unshakable rhythm and Angus noodling over the top. Despite being a simple song, Johnson's ferocious wail helps hit this one out of the park, while "Rock the Blues Away" leans more towards a cleaner, gentler (if that's possible) AC/DC; less rocking and more rollicking.
"Miss Adventure", like all 11 songs here punches in around three minutes and comes not just with a cheeky title, but Stevie playing a shuffle that would make Malcolm proud. A hard to forget, catchy chorus has everyone joining in on the 'nah nah nahs' before its all over and hurriedly onto the next track.
"Dogs of War" continues the idea found with the chanting War Machine off Black Ice, while "Got Some Rock & Roll Thunder" sounds less fully realised than other simpler, more immediately attractive tracks on the album.
There's very little if any fat on "Rock Or Bust", it's deliberately lean, the result of a band (or Angus at the very least) knowing exactly what's wanted upon entering the studio and wasting precious little time.
As such, there's also little in the way of the unexpected appearing around a corner, there's no real surprises and certainly no deviation from the formula that's made AC/DC one of the most popular and widely respected rock'n'roll bands of their generation.
In short; this legendary band won't waste your time. "Rock Or Bust", indeed, Rocks. 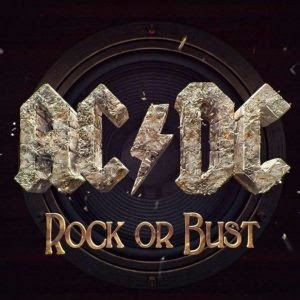 Posted by The Sinister Angels realm at 18:49