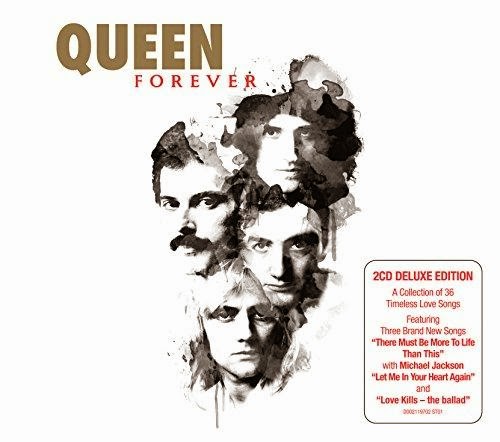 "Queen present Forever, an exciting album featuring three brand new Queen tracks, including the long-anticipated track by Queen and Michael Jackson, "There Must Be More To Life Than This". The rest of the package brings together Queen hits, classic tracks, and new takes on well-known songs. The tracks are all linked to represent a definitive collection of Queen’s timeless love songs, and celebrate the extraordinary musical path of one of the world’s greatest rock bands. This special deluxe edition contains 36 tracks over 2 CDs in a deluxe package with a 24-page booklet."

Well its a pretty nice track list I have to say that, and for once not one based purely upon the hit singles. It really is nice to see songs like Nevermore, In The Lap Of The Gods (Revisited), Dear Friends, Lily Of Then Valley, Bijou, Mother Love and Don't Try So Hard represented, as they, in my humble opinion showcase some of Queen's finest (if softer) moments.
As for the three new tracks, well they aren't really new songs are they?
Let Me In Your Heart Again is a reworking of a song that was abandoned during the Works recording sessions (circa 1983) that was eventually recorded by Brian Mays future wife Anita Dobson. Now don't get me wrong, its a great song, and the guys have a done a great job rebuilding Freddie's lead vocal here, you would never know that it has been pieced together from various takes.
Its not the strongest Queen song that I have ever heard but it is great to hear a previously unheard Freddie vocal so this track is a winner for me.
Love Kills - the ballad, now this has proved to be a little bit controversial amongst Queen fans. The disco arrangement of the original has been completely thrown away, and the song turned into a pretty bloody amazing ballad in my opinion. I really like what the guys have done with this song, giving it a completely new lease of life, another winner in my opinion.
There Must Be More To Life Than This, featuring one Michael Jackson, (William Orbit Mix). Well I have been lucky enough to hear the original demo of this song recorded by Freddie and Michael back in 1982/1983, and although the recording was only a rough demo it was in many ways superior to this William Orbit mix. to be completely honest I have heard some pretty awesome fan mixes of this track over the years that are way superior to this mix! Michael's vocals only really feature in bits and drabs, probably due to the low quality of the original recorded material, I would have much preferred to hear a Queen mix of State Of Shock that Freddie and Michael recorded together during the same sessions, this song is fair but really doesn't cut it for me.
As for the rest of the track listing, well what can I say, its a really nice cross section of the bands entire career, focusing up on their softer side, but featuring some of their best songs and some of my personal favourites.

Recommended for die hard fans and anyone who doesn't already own the bands entire back catalogue!


Note this is a different mix to the one featured on the album! (Thankfully!)
Posted by The Sinister Angels realm at 19:10