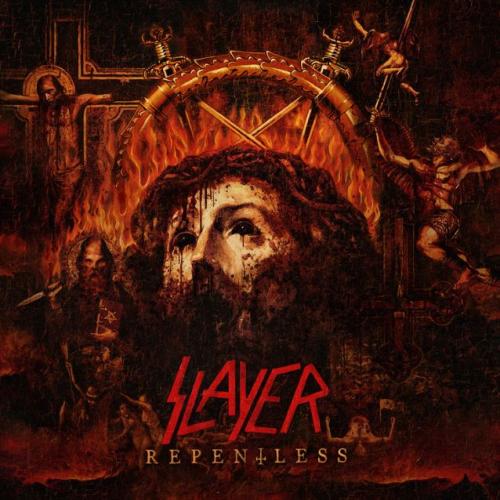 This month saw the return of one of the titans of the heavy metal and thrash genre's, namely that of Slayer, who released their first new studio album since the tragic death of guitarist Jeff Hanneman, who sadly passed away prematurely two years ago. Are or can Slayer still be Slayer without one of their integral components and songwriters?  Well to be totally honest, yes!
First let me just say, that this the new album, Repentless, has the best production that I can recall any Slayer album having, the songs are crisp and clear, and packed full with power courtesy of one Mr. Terry Date. (the Wildhearts / Pantera etc.).
Now as for the songs themselves?
Repentless opens with a the instrumental, 'Delusions of Saviour', which is just so unmistakably Slayer that any doubts that the listener may have dissolve away quickly. Kerry King and Tom Araya are in fine form here, providing blistering riffs and brutal lyrics. Just check out the refrain from 'Pride In Prejudice', "Don't give me your power bullshit" or 'Vices', "A little violence is the ultimate drug....lets get high!"
Repentless sees Slayer pulling no punches at all. The title track is a fast as anything that they have ever recorded. New guitarist Gary Holt (Exodus) does a great job. The album features a touching tribute to late guitarist Jeff Hanneman in the form of Jeff penned 'Piano Wire' which was apparently one of the first songs written for the World Painted Blood album.
Repentless is a great album packed full of great Slayer songs, that also sees Slayer in fine form. Is it as good as South Of Heaven, Hell Awaits or even Seasons In The Abyss? Only time will tell, but I honestly believe that this is the best possible album  that Slayer could have put out.
Welcome back guys!


Well Worth Checking Out!