Bullet - The Entrance To Hell 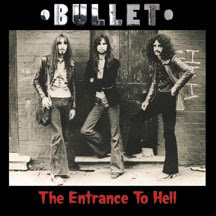 Bullet began as a sort-of super group featuring members of Quartermass and Atomic Rooster back in 1970. An album was recorded but never released under the name ‘Bullet’ due to an American band already using the name so the band promptly changed their name to Hard Stuff and re recorded some of the Bullet tracks for their first release. Now, forty years later, the original tapes have been restored and remastered and the album is seeing the light of day thanks to Angel Air Records.
This album has a typical 70's vibe going on, heavy and full of jam's ala early Sabbath etc, and to be fair these guys showed alot of promise. Theres plenty of variety on offer here, and on a hole the songs are all really strong. Stand out tracks include “Millionaire”, “NO Witch At All,” “Sinister Minister” and “Time Gambler” each showcasing riffs that in many ways were way ahead of their time!
If you love 70's era classic rock then you really should check this album out!