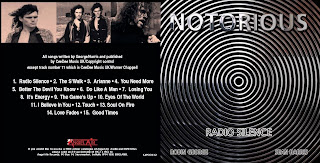 Notorious was a project put together by guitarist Robin George (Phil Lynott, David Byron, Magnum) and vocalist Sean Harris (Diamond Head) back in the late 80's and became caught up in record company politics eventually seeing the band getting droped and the album deleted a matter of weeks after its original release. The duo went into the studio to knock out a melodic rock record but the album was mixed, remixed and, with the changing of the sounds, the music lost the duos original intent. Now for the first time, thanks to the guys over at Angel Air Records we are presented with the digitally remastered and expanded edition of the albums original demo recordings, that finally allow us to hear exactly what Robin and Sean had in mind.Most of the songs have stood up well to the test of time, showcasing the songwritting quality that Notorious bought together.
There is a great mix of melodic rock styles presented here, from the riff driven Radio Silence, to the funky groove of songs like The S'walk, to the blueset comercial tracks like Arianne and You Need More. Ron Georges guitar work is amazingly versatile, providing Sean Harris with the perfect platform to let his voice really shine. Sean himself sings with a crisper cleaner style than his previous work with Diamong Head.
A Great album that could have been a massive comercial success had it not been for the politics at Geffen records back in the day. Well worth checking out, Very highly reconmended.
Now if Angel Air records could persuade Sean Harris to allow them to release the album he recorded with Diamond Head back in 2004 before leaving the band Id be a very happy bunny!

website - http://www.robingeorge.co.uk/notorious.htm
rating - 9/10
Posted by The Sinister Angels realm at 13:23