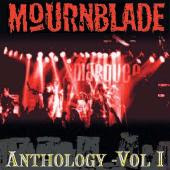 Once hailed as the future of heavy metal by the likes of Kerrangs Derek Oliver, things never quite panned out for Mournblade.
This Anthology is a collection of early demos and live tracks taken from their 1984 / 1985 era, collected together here by one of the Uk's most prestigious heritage labels, Angel Air Records.
One thing that makes this collection of interest to me is that lead singer, Dunken Mullet would go on to briefly handle vocal duties in the early incarnations of one of my favorite bands, The Wildhearts.
Now the sound quality is not the best on this cd, but then again it is primarily a collection of demo and live tracks, some recorded on a simple 4 track way back in 1983 / 1984, so that’s to expected I guess, but I’m not too sure where Mr. Oliver was getting his impressions from.
Mournblade's sound is a kind of cross of NWoBHM and 70’s punk, but also heavily influenced by prog rock bands such as Hawkwind ect.
Another thing about this band, is that like many of their contemporaries they weren’t afraid of hard work, the band gigged the London club circuit to death and later the regions- throughout 1984 and 1985 alone clocking up no less that 400 shows including regular headlining slots at London's MARQUEE, 100 CLUB and DINGWALLS, building themselves a healthy fan base, but lineup changes and the shifting tide in musical tastes meant it was all for nothing.
Anthology is a great reminder of a band that could have been big, if not massive, and fans of the the band will surely appreciate finally having the many hard to find tracks together on one cd at last. Fans of NWoBHM will find this album interesting, other than that I’m not sure how relevant this cd will be in today’s musical climate.

Standout tracks include, Servants of Fate, Desolation, and the 2009 remix of Titanium Hero


Posted by The Sinister Angels realm at 10:35