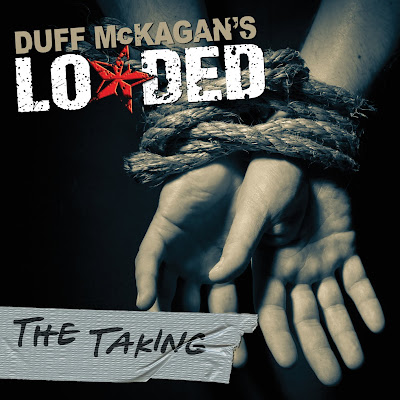 Duff McKagan's Loaded returns this year with their second album, The Taking.
The Taking is jam packed with unadulterated punk rock and no-frills rock 'n' roll. The Taking is a solid effort, yet it never really manages to step out of the shadow of its predecessor, the excellent Sick!
“The Taking” was produced by Terry Date and the current lineup of the band consist of Duff McKagan – lead vocals, rhythm guitar, Mike Squires – lead guitar, backing vocals, Jeff Rouse – bass, backing vocals and Isaac Carpenter – drums, percussion. It kind of reminds me of the British band The Almighty. It’s a blending of rock, metal, pop punk and post grunge like sounds, little bit dark, but quite pumping. 12 different colored songs finally make this album quite interesting. There’s something for everybody,
There’s plenty of variety on this album, with each song having its own flavor so to speak, it’s a very solid album from a hugely talented band.
A full classic Guns n’ Roses’, or even Velvet revolver reunion may never happen, but with Loaded, Duff has great outlet for his musical ideas.

A very good album, well worth checking out!

Posted by The Sinister Angels realm at 14:42