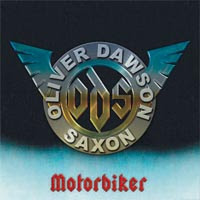 "
During the summer of 2000 the line up of OLIVER DAWSON SAXON took to the world stage and delivered great music that had been enjoyed for 20 years previously and their new music. Over the past decade they have released live albums and DVDs

"Motorbiker" is a brand new album of new songs and delivers heavy duty material from the masters and originators of NWOBHM " Featuring the talents of GRAHAM OLIVER, STEVE DAWSON, JOHN WARD, NIGEL DURHAM, and HAYDN CONWAY.

Hmmm was this album what I was expecting, well no, its so much better!
I have always been a little bit of a Saxon fan, and feared that this would be just some ex members trying to replicate faded glories and cash in on the name that they helped to create, but boy, that couldnt be further from the truth. Firstly, these guys make no attempt to try and recreate the Saxon sound, hell they generall sound much more relevent and contemporary than Saxon have in years! This is in part thanks to the vocal talents of John 'Wardi' Ward, who has a great contemporary voice and cocal style, much more throaty than Biff Byfords ever was. The albums sound has a very up todate sound and edge, and the songs, well the songs are just top draw throughout!
from the heavy crunching riffs of opener Chemical Romance to the up tmpo NWoBHM stylings of Whipping Boy and Motorbiker to the Heavy attitude filled No Way Out to the subtle Just Another Suicide and modern day themed Sinternet!
This album is filled with eleven great new relevent tracks and one little instrumental.
This album deserves to be heard!
Well worth checking out!

Posted by The Sinister Angels realm at 13:31