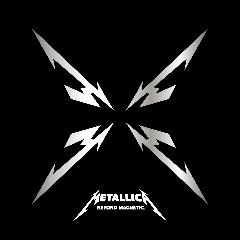 Ok time to 'fess up I guess, first of all I'm really not sure as to whether this EP is actually an official release or just a leaked bootleg. It claims to be four left over, or out take tracks from the nbands last full length studio album, Death Magnetic. Now I have to be honest, I truely beleive that the last great album that Metallica released was the 'Black Album', although their best work in m,y opinion is to be found on the 'Master Of Puppets' and 'And Justice For All' albums. Death Magnetic saw the band heading in the right direction, with the songs being closer to the classic Metallica style than the last few releases, but I felt that the songs were too long, bloated by their excessive riffs, great as they were they were just too long for me.
Now here is something that I am finding it hard to get my head around, all four songs here are stunning, so why were they left off of the last album?
Hate Train opens things up with a spirited and energestic workout, seven minutes shoot by before you know it, a great song. Next up is Just A Bullet Away, which I guess has a more moderate tempo, yet is a truely great song, tempo changes, attitude, the lot, and I love the mellow break down around the four minute mark!This is probably one of the best songs Metallica have put out since 'And Justice For All'!
Hell and Back is probably the most commercial of the bunch here, and in my opinion could have fitted nicely onto any album, especially the Black Album. Once again a great song.
Closing the album out is the real gem, Rebel in Babylon, which see's the guys remembering their thrash roots with the riffs hurtling past at a million miles an hour, classic Metallica!

I am so blown away with the four songs on offer here i just really wished that they had appeared on the last album!
proof that the guys can still cut it, now can someone please explain what the hell happened with Lulu?

Posted by The Sinister Angels realm at 19:51