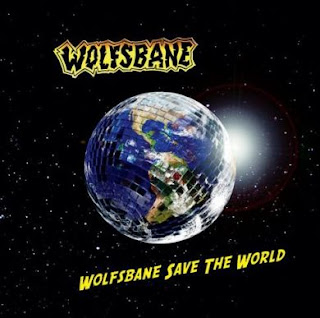 Hey remember the nineties, we had  a great Uk music scene with the likes of The Wildhearts, 3 Colours Red, Honeycrack, Wahtever, The Almighty, Little Angels, Skin, and god damned Wolfsbane! Those were the days, when men were men, women were women and rock was ROCK! It all ended for Wolfsbane when frontman Blaze Bayley opted to leave and fill the huge shoes of the departed Bruce Dickinson in Iron Maiden, a sad day, as Wolfsbane were one of the best live bands around at the time, and their swan song album, Wolfsbane was simply brilliant.
Well guess what folks, the guys reunited a few years back for some live dates, and enjoyed it so much, they decided to write and record an album! Praise be to the lord of rock n roll!
So is the album any good, you bet your bottom dollar its bloody good, the Howling Mad Shitheads are going to love it!
From the Britrock charge of opening track, Blue Sky, to the Dave Lee Roth era Van Halen esque over the toppness of Teacher, to the pounding punk metal work out of Buy My Pain, this is classic Wolfsbane in all of their glory, its just as though they had never been away!
Starlight, a great little ballad, and Smole and The Red Light are great tracks, Illusion Of Love is a classic in the making, a real gem, a great song!
Live Before I Die is a typical Wolfsbane track, with the added metal edge probably from Blaze's solo stuff, a great song, even down to its ska type break lol.
Who Are You Now brings a britrock edge back to things that many of the bands nineties contempories would be envious of, whilst the punk black work out of Everybody's Looking For Something Baby is just classic Wolfsbane! Child of The Sun is a trippy little number whilst album closer Did It For The Money is a blast of puer Wolfsbane.

So, who would have guessed that in 2012, Wolfsbane mwould release probably their best and most varried album to date.