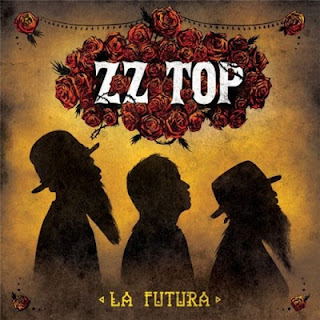 
After nearly a decade's wait, fans of 'that little ole’ band from Texas' called ZZ TOP are finally rewarded with the trio's 15th album, "La Futura".
Co-produced by Rick Rubin and the band's ever-so-stylish guitarist and singer Billy Gibbons, La Futura sees the band return to much more stripped down and basic sound, pretty much a direct-to-the-amp sound, trying to recapture the magic of their early 's releases. Does it manage it? Well I think it does, this album sounds bloody great, but then again I have always loved Billy Gibbon's tone, and I am quite thankful that the keyboards, electronics and over production of the late 's and 90's are nowhere to be found!
The three beards here give us some cracking bluesy rock songs, do they reach the heights of their previous classics, well probably no, but hell, its new music from ZZ Top and its pretty damn good ta boot!
Highlights include, Over You, Flyin' High Big Shiny Nine and threshold Of A Breakdown, although the guys do manage to completly miss the target with their cover of Its Too Easy Mañana, which simply doesn't work.

On a whole a petty amn ine album if your a an of the band check this one out!

Posted by The Sinister Angels realm at 22:52