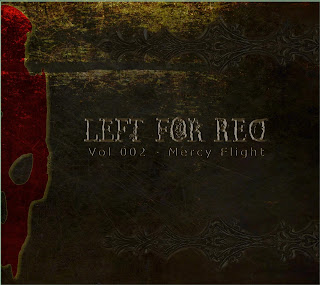 "Left For Red are a Four Piece Heavy Metal band formed in 2009 with members of Groove Sadistic, ShakeDown and Viable Truth. Left For Red have a wide range of influences from Pantera, Deftones, Tool, Rush, Alter Bridge and Strapping Young Lad to name a few. LFR's sound is a mixture of Punk, Metal and Pop which makes you want to dance, sing and beat the crap out of the person next to you." Well that is what their press says and to be fair I cant really find a reason to disagree. For me Left For Red deliver that perfect blend of hard rock and all out metal. Riffs galore, a vocalist that can sing as well as roar his way through a song, and well talent in abundance.  Are the songs any good? Well considering that these guys haven't been together all that long the songs are bloody great. Despite having to record on a tight budget, this EP being self financed, Left For Red, judging by the evidence on this EP alone, can hold their own with any band out there, and I really can see big things in their future, especially in the USA. Could Left For Red be the best metal band to come out of the midlands since the mighty Black Sabbath, I think they show the potential to be just that!

So come on guys, get behind a great young British band

Posted by The Sinister Angels realm at 22:55