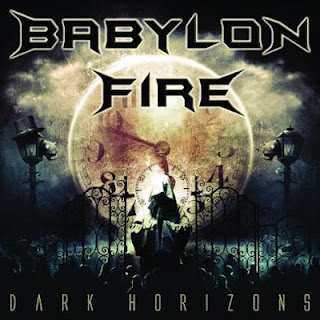 Released on 12th November through Rocksector Records, Dark Horizons is the debut full length release from Manchester based four piece heavy metal band Babylon Fire. Dark Horizons contains twelve solid tracks which showcase the bands talent and diversity as songwriters. having to adapt to being a four piece following the departure of former guitarist Will Reece the band have honed both their sound and their songs to bring us a very solid debut. From the opening riffs of The Clarion Call the quality is never in doubt, and the intensity never really lets up throughout the entire duration of the album. in fact the tempo doesn't really ease off until track four, Stripped Away, which is a great little rocker, a little more commercial than the onslaught and intensity of the three previous tracks.Demonocracy continues to mix things up a little, the intensity returns but its mixed some melodic guitar sections and some great melodies. Shattered Crown is pretty much a great traditional heavy metal track which leads nicely into a great little instrumental, The Gates Of Oblivion. Gates....sets up the mighty Wrath Of the Fallen, which is probably my favourite track on the album. Here we see the intensity return, but its tempered with plenty of melody, a truly great song. The intensity continues with Cycle Of Addiction, which is a great metal / rock song. Within The Mouth Of Madness sees the intensity continue, a great track some great lyrics and its Charlie Manson intro. Penultimate track Rise Through Babylon, sees the tempo mixed up a little, a great song. The album closes out with I Still Remember, an epic song.
Its hard to believe that this album is the bands debut, it really does sound so accomplished as though the guys have been at this game for years!
To be honest Dark Horizons is a really strong debut album from a very promision British band. Proof that the British Rock and Metal scene is truly alive, and has a great home on Rocksector Records!

Posted by The Sinister Angels realm at 22:04