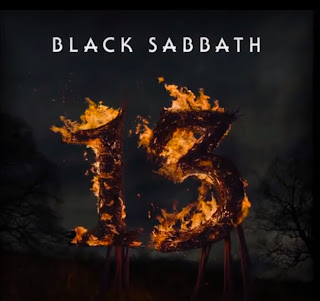 
Black Sabbath return with (almost) their original line up and the first full studio album to feature Ozzy Osbourne on lead vocals in 35 years. (The last being 1978's Never Say Die.) In the absence of original drummer Bill Ward we see Rage Against The Machine drummer, Brad Wilk, joining the legends Tony Iommi (Guitars), Geezer Butler (Bass), and Ozzy Osbourne (Vocals).Production duties are handled by one Rick Rubin, a masterly producer whom has had a rather hit and miss track record as of late, but its good to say that he managed to pull off a great job here, capturing the original Sabbath sound rather well.
On a side note, before I begin the review proper is warming to note that 13 has given Black Sabbath their first UK No1 album in 43 years (Paranoid being the last!) and their first ever No1 album on the US Bill board top 200!
Now for the review!
The album opens with End of the Beginning. A brave choice for an album opener clocking in at a little over eight minute long, but it works well setting the tone for what is too follow! The song has a very understated epic feel it. Heavy in place with Ozzy providing a great melodic and slightly unsettling lead vocal whilst Iommi provides some great riffs throughout! A great opening song!
Next up we have the albums lead single, God Is Dead?. This song is a killer, and I can totally see why it was chosen as the albums lead single. Heavy, with lots of twists and turns with the closing sections bringing classics like Hole In The Sky to mind. A great song!
Loner follows, changing the pace and feel a little. The song comes across as a sort of mixture of Johnny Blade and N.I.B. A great song .
Next up we have the albums first gem and future classic, Zeitgeist. A mellow track that is very reminiscent of Planet Caravan. I love the atmosphere that this song creates with its simple and restrained structure! Love Iommis guitar work throughout and especially the solo. this song shows that Black Sabbath have lost non of their 70's magic.
Age Of Follows, changing the tempo a little. A heavy track that's guaranteed to get the crowd fired up in a live environment, with some great riffs.
Next up we have Live Forever. This songs sees Iommi and co pick up the pace. A great song in the veins of Children Of The Grave, Back Street Kids, and Hole In The Sky.
Following Live Forever we have the awesome Damaged Soul, a very heavy blues work out, and a guaranteed future classic. this track can holds its own along side ANY track from the bands legendary first six albums. The atmosphere, the riffs, Ozzy's harmonica, everything just slots perfectly into place with this one. A great song
Closing out the album proper we have Dear Father. A great song that deals with a rather dark subject matter lyrically. Another future classic! Plenty of tempo changes to drive the song along. It even ends with the thunderstorm and rain together with church bells reminiscent of the the debut albums title track Black Sabbath.

Next we have the three bonus tracks that come with the deluxe edition.
First up is Methademic. The song begins with a gentle acoustic opening section before exploding into an uptempo melodic rocker, that to me has a similar feel (musically) to I Witness. I have a feeling that Geezer was heavily involved in the writing of this one as certain sections remind me of his solo bands (GZR) Mysterons from the album Black Science. Guaranteed to become a live favourite!
Peace Of Mind follows, the shortest song of 13's entire tracklist, and despite a promising opening with some great lyrics, the song quickly becomes rather forgetable, almost Sabbath by numbers.
Pariah follows, another gem in my opinion. A melodic track that just works.

Finally we have the Best Buy Deluxe editon exclusive track, Naivety In Black. A fast tempo-ed track, with some autobiographical lyrics and some great driving riffs! Another gem worth tracking down!

So there we have it, Black Sabbath return with an album that has been along time in the making, bearing in mind that they originally reunited back in 1995, and ended up scrapping album plans to disband agin and continue with various other projects.
the band can rest assured that in 13 they have created an album that they can be proud of, an album that can stand shoulder to shoulder with any album from their illustrious back catalogue, now I for one am just hoping that this isn't their final album! With 13 they have proven that they have plenty of gas left in the tank! Sure I would have loved Bill Ward to have been a part of this, and if there is a follow up album I hope he can reconcile his differences with the rest of the guys.

Now in my dream world we have have a follow up album from Black Sabbath, and new solo albums from Iommi, Geezer, Ozzy (?) and Bill Ward!

A great album, well worth the wait!

Posted by The Sinister Angels realm at 10:56