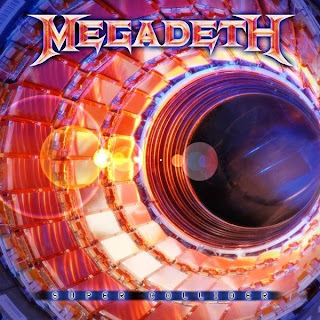 
Megadeth return with their latest offering in the form of Super Collider, the follow up to 2009's Endgame and 2011's Th1rt3en., but something has changed.
Dave Mustaine seems to have abandoned the high speed complexity of these two previous albums and opted to issue a more melodic, dare I say commercial sounding album. Its not the first time he has walked this path, but how does Super Collider fair?

The album opens with Kingmaker, a fast tempo-ed track that wouldn't be out of place on any of the bands previous albums. Next up is the title track, Super Collider, a mid paced straightforward rocker. Burn! continues in a similar vein, yes it picks up the pace a little and Mustaine snarls out the lyrics but that's about it.
Built For War drips with attitude, a great song, should be fun live.
Off The Edge is next, another mid tempo-ed rocker, there is nothing wrong with it, it just seems to lack something for me, despite its great guitar harmonies this is one I'll probably be skipping alot.
Dance In The Rain slows the pace down even further. This track is a corker, it has a feel that would fit comfortably on either Count Down To Extinction, Youthanasia or Risk!. As I said its a great song.
Beginning Of Sorrow is slow moody burner of a track, whilst The Blackest Crow brings a little southern flavour into the mix.
Forget To remember follows and has a real radio friendly vibe to it. Not a bad song, with some great lyrics refering to alzheimers.
Next up is Don't Turn Your Back... begins with some great bluesy guitar work outs before bursting into a great up tempo rocker, love this one.
Closing out the standard edition of the album is a great reworking of the Thin Lizzy track, Cold Sweat. Its also worth noting that this is the first time Since Peace Sells... that a cover song has featured on the main albums track listing.

The deluxe edition comes with two additional bonus tracks, All I Want and A House Divided. First up is All I Want, a great little fun uptempo rocker.
A House Divided is a track with a more familar Megadeth vibe to it. A good song that should have made the album proper in my opinion.

On a whole Super Collider is a great melodic album which will find more favour with fans of Megadeth's previous more melodic albums such as Countdown To Extinction, Youthanasia, Risk, Cryptic Writings etc, but as long as fans keep an open mind there is plenty here to enjoy!

Posted by The Sinister Angels realm at 14:26