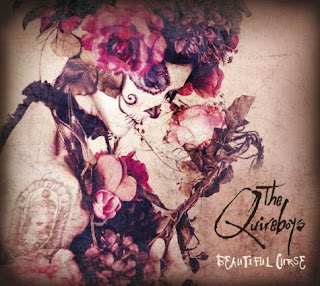 The Quireboys return with new management, a new album (their 7th!), a major tour coming up and a brand new spin on things in general, Is all set to rocket sky-high for Spike & Co. (Paul Guerin, Guy Griffin, Keith Weir)?

Fans get a few surprises with the new album, but the biggest is perhaps the stunning artwork, something you'd not immediately associate with these much loved gypsy rock 'n' rollers. Themed around the Hispanic celebration 'Dia De Los Muertos' (Festival Of The Dead), the front sleeve, while it might looks a bit tad macabre, it makes perfect sense once you listen to some of the tracks.

It seemingly functions as a metaphor to connect with lost lovers, lost soul mates, and probably lamenting some lost years too, but although The Quireboys have taken five years to release new material, they sound better than ever.

Opener "Too Much Of A Good Thing" with its choppy intro and Spike's 'alright, c'mon on now' growl, straight away steers towards well-known Quireboys' territory - a bit of woo-hoo-hoo in the chorus, clean hooks and guitar solos, and an altogether rollicking vibe prove that one can never have enough of a good thing.
"Chain Smokin´" is bursting with full-on swagger and attitude sounding as if it was composed during a ride in the fast lane, then again, I can't imagine the band taking a different route anyway. Cool keyboards, cool riffs, and a revving classic Quireboys style.
The brittle charm and well-crafted tune of "Talk Of The Town" is polished with rough 'round the edges, while the swooning "Mother Mary" although not exactly a sonic step forward as far as rock ballads go, is beautifully delivered. Spike uses his cheese-grater voice to maximum effect here, and the all-hold-hands-and-sing-together feel make this number another winner.
We're transported to The Quireboys' irresistible trademark bar room sound on "King Of Fools", though the jauntiness of it all belies Spike's confession that he sees himself as the anti-hero of the title.
"Homewreckers and Heartbreakers" is bluesy and intense, with Hammond all over, raspy (even more) vocals and a solid chorus, and then we get a rough-cut diamond indeed with "Diamonds And Dirty Stones", stirring deep in classic roots but adding layers of hard rock driven guitar solos.
Every title track worth its salt should have an instantly memorable chorus and melody, and that's precisely what we find in "Beautiful Curse"; 'I've been blessed, I've been cursed, it's you that I love first / For better or for worse, I've been blessed with this beautiful curse / For rich or for poor, for less or for more, it's you that I adore'. Bless! Real catchy tune, and both frontman and fellow band members play out a musical romance of their own. A tune deserving plenty of airplay for sure.
We get another fine Quireboys-trademark ballad with "Don't Fight It", with Spike dreamily crooning away while the more quietly tinged instrumentation sits neat and tight.
"For Crying Out Loud" explodes with a honky-tonk infused struttitude, and you want to believe that all the dead come back to live, if only to shake and rattle along to this number before their bones give up again.
Upon first listening "Twenty Seven Years" surprises by taking a slight detour from your typical Quireboys sound. And I like the surprise; the track bounces back to finest American classic rock, bearing slight Tom Petty/Stevie Nicks influences, before some spine-tingling wah-wah keyboards temporarily take over. Inspired is what you call it, and one of my favorites of the CD.
Closing number "I Died Laughing" rolls along nice and smooth like matured whisky, but the rather abrupt finish leaves the listeners calling for more.

The Quireboys are back in full form with a quality disc, on par with the best they've released in their entire career (read debut A Bit Of What You Fancy).
"Beautiful Curse" captures all the Quireboys charm via the band's classic songwriting, whiskey-soaked vocals and melodic riffs... in short, their trademark Gypsy Styled Rock. The band have taken all their old school Rock 'n Roll values and evolved it into a more mature approach, helped by the pristine production by Chris Tsangarides (Thin Lizzy, Gary Moore,) and with the legendary Simon Hanson (Squeeze) being added to the rhythm section.
To put it upfront, the sheer energy of (London) THE QUIREBOYS much anticipated 7th studio recording "Beautiful Curse" simply nails you to the wall. You won't remain nailed for long though, as the band's instantly recognisable fare begs you to cut footloose.

In fact, in many ways, "Beautiful Curse" takes the listener back to the glorious days of the band's beginnings, and believe me when I say some songs here easily sit alongside the classic debut, if indeed it doesn't surpass it.


This album has been a ,ong time comming and is well worth the wait!

Posted by The Sinister Angels realm at 12:16