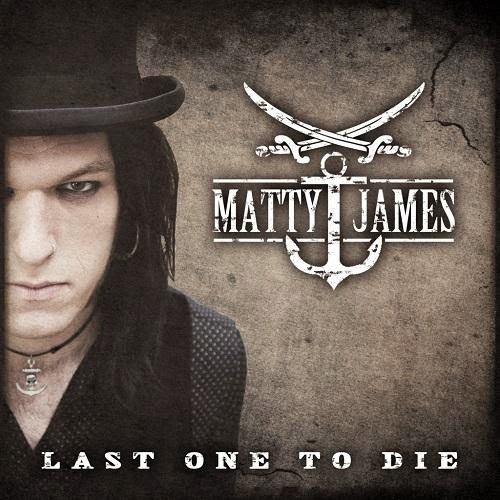 Born in Ireland, MATTY JAMES has a punk background on various bands, but he has never stood still and evolved into a talented multi-instrumentalist, singer songwriter. Since stepping out as a solo artist in 2012, Matty James has released two EPs and toured relentlessly in support of his craft.
"Last One To Die" is his electrifying full length debut album and boasts everything from melodic rock and bluesy rock n' roll to Americana fused ballads.

With the exception of some contributions from friends like Tyla J. Pallas of The Dogs D'amour fame, James wrote every song, played most every instrument and also co-produced.
'm not sure if 'eclectic' is the right word for the songs within as there seems that common theme of James and guitar, whether electric or acoustic. His whiskey soaked voice set against an acoustic strum creates a signature sound that draws listeners in from the off.
Opener "Leavin" is a slow building rip snorter rockin' ride with a spaghetti western vibe, guaranteed to kick any hangover into the middle of next month and a track which very much sets the contextual scene for the rest of the album.
One of my favourites is "Same Old Me (Brand New You)" which definitely would give the Quireboys a run for their money in terms of its middle-finger devil may care attitude.

The title track sees a typically swaggering appearance from the one and only Tyla J Pallas with a really good vocal arrangement, while we find a touch of English blues on "Don't Turn Your Light Out On Me".
There's an Americana quality to several songs like the delicate acoustic ballad "This Ones For", or "The Cold Light of Night", where the song is definitely driven by the vocal arrangement and acoustic riffs. You get more of an acoustic side to this motif with "Never Learn" with its light harmonica.
Then, James can get more rambunctious, dosing songs with a rock and roll blood within the jumpin' "Up In Smoke" and the melodic "Better Days".
Right from the off this full length debut solo offering from Matty James is a truly enjoyable record, delivering pile drivers and blindside sucker punches in every single department. "Last One To Die" is pure, honest-to-goodness rawk rock 'n' roll delivered with passion, spirit and a genuine love for the music.


Official website here
Posted by The Sinister Angels realm at 16:41