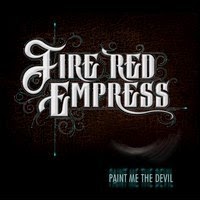 Fire Red Empress are a Midlands based band born from the ashes of the awesomely talented Voodoo Johnson, and are now releasing their debut EP in the form of Paint Me The Devil.
Now Voodoo Johnson were a very popular and promising band who never really got the breaks that they deserved. They released their debut album, 10,000 Horses to much critical acclaim only to have their lead
vocalist, the extremely talented Kevin Bayliss, call it a day and announce that he was leaving the band part way through their tour. Un-perturbed the band re-group and recruit the services of new lead vocalist Nick Taylor-Stoakes and set to writing and recording a new Ep, 2011's Black Powder Mother Loader, which saw the band head in a heavier direction musically, and again to much critical acclaim. After a whole bunch of tour dates the band locked themselves away to record their new album. But after personal tragedies, such as the passing of close family members the band opt to change their name and effectively start all over again in the guise of Fire Red Empress.  With a string of successful gigs up and down the UK, FIRE RED EMPRESS quickly garnered the attention of über-producer Jacob Hansen, whose work with Danish rock giants Volbeat speaks for itself. The songs transcended the miles and were recorded and mixed at Hansen Studios in Ribe, Denmark, where Jacob captured the intense energy of the band’s live performance and masterfully harnessed the massive riffs and epic soundscapes.
The three tacks on offer here continue to see the band moving in the heavier direction of 2011's Black Powder Mother Loader, whist showcasing the guys song writing abilities with the songs going through lots of twists and turns, but in arrangements and tempo.
My pick of the bunch here is Behind The Veil, which has a real epic feel to it, although titles track, Pain Me The Devil is a bloody close second!
Its really good to see one of the counties best bands back in action!

Very Highly Recommended
Check these guys out, you wont be disappointed!

Get the EP here


Posted by The Sinister Angels realm at 15:11